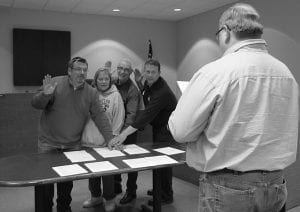 Incumbents Arletta Ruton, Tom Wolfe, and Robert Masone terms had expired at the end of the year. Though all had been reelected, they and new member Douglas Poorman had not taken the oath of office. So, Monday night, Buckeye Lake Mayor Clay Carroll gave all four the oath of office simultaneously.

Council still has one vacancy for a two-year term created when Wolfe resigned to accept the four-year term he won last November. He had been serving the remainder of former member Michelle McCormick’s term. Council members have through January to fill the two-year position. Carroll said two people have applied for it as of Tuesday.

Ruton said she’s served on council for six years, participated in the village’s planning and zoning, and zoning appeals boards, two charter commissions, and is retired from the Buckeye Lake Fire Department after 17 years of service. She also regularly attends committee meetings. “I think it’s important that the council president gives some guidance to the committees,” she said. “So, I’m throwing my hat in the ring.”

“I’ve been very active in organizing this whole community and getting things done for this village,” Zwissler said. If president, she said she would work diligently to keep the village on the right path. Zwissler added she’s organizing a community meeting at starting at 8 a.m. on Saturday, Jan. 23, at Lakewood to discuss revitalizing the lake area and how this would affect all three counties – Licking, Fairfield, and Perry-surrounding Buckeye Lake. Zwissler said she worked for the village’s betterment even before she was on council.

Wells planned to nominate Wolfe, who declined the nomination citing a lack of experience on council, so she nominated herself. Wells said she hopes controversies on council are a thing of the past. She said she served on council previously from 2001 to 2004 (before serving again, beginning 2013), when she was council president pro tem (the pro tem presides over council meetings in the president’s absence). Wells said she is very detail oriented and has served as chair of the village’s finance and personnel committees, reviewed employee insurance options, and has explored alternative revenue sources. Wells said she could meet with the mayor regularly and promised president’s reports with substantial and useful information.

“I’m used to juggling many things and I think I can handle this task as well,” Wells said.

Zwissler received four votes with Ruton and Wells each received one vote. All three candidates voted for themselves.

Carroll explained, according to the village charter, the council president presides over council meetings and appoints members to village committees. The president also steps in for the mayor if the mayor is absent or unable to carry out his or her duties. In such cases, the president has all the mayor’s power, except for hiring or firing village employees.

Masone nominated Ruton as president pro tem and Zwissler nominated Wolfe. Wolfe received four votes to Ruton’s two votes. Each candidate voted for his or her self.

• Carroll said the village accomplished many projects during 2015, but has yet to finish a crosswalk project across Ohio 79 and the restrooms at Ryan- Braden Park still need some work. He said those projects would likely be on hold through winter.