Yates will replace Zollinger as trustee

By Charles Prince and Scott Rawdon 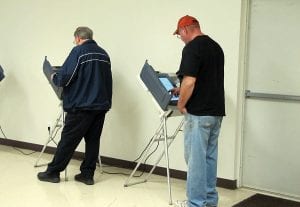 Millersport Fire Chief Bill Yates surged back after a one- vote loss to incumbent Trustee Sonny Dupler two years ago to best Douglas Leith by a 1104 to 997 vote. Battle lines were drawn in this race with Trustee Terry Horn endorsing Yates before Leith’s candidacy was known. Dupler worked hard to elect Leith and Zollinger endorsed him a couple of weeks before the election.

Sever al Beacon let ter writers claimed that it would be a conflict of interest for Yates to serve as a trustee. Yates answered those critics last week in The Beacon stating, “I intend to be transpartent to the Ohio Ethics Commission and ask that they render their opinion allowing me to continue in some capacity as a volunteer for either or both fire departments.” He added that ORC 505.011 allows a trustee to serve as a volunteer firefighter or police officer. 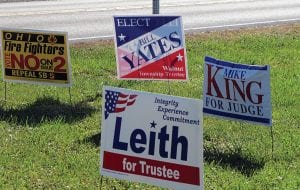 Fiscal off icer Lynn A. Kraner was unopposed for a four-year term. She was appointed to the post last year after Sally Hempleman resigned, citing conf licts between the trustees. Hempleman had been appointed a couple of weeks ago after Pauline Ety resigned.

Millersport Mayor Dean Severance was unopposed for another four-year term as was Council President Dave Levacy and Dina Reasoner for the Board of Public Affairs.

In Baltimore, Mayor Robert Kalish said the 731 votes he garnered running unopposed was the largest total of his career; he won a fourth term. “I appreciate the confidence the voters have placed in me,” he said. “That was a great night.”

Baltimore’s four mill, four-year additional police levy was soundly defeated 633 votes against the levy to 355 in favor. Kalish said he appreciates and respects the will of the voters, “but down the road we will need to address the police.” He said the defeat would be discussed with the village council and the village finance committee to determine what modifications could be made to a future levy to make it more palatable to voters. “This is the first time we’ve tried,” said Kalish. He believes the community supports the police department but with the current beleaguered economy the timing was wrong to pass a levy.

Kalish said it’s too early to say if the levy’s defeat will affect police services to the community. “I can’t say to residents (police services would be affected) or would not at this point,” he said. Kalish said the finance committee will meet next week to discuss the police department and the levy. He said he can’t rule out reductions in police services, but the committee would need to make recommendations. “We’re still working through stuff,” said Kalish.

Five candidates sought two position on the Liberty Union Thurston Board of Education. Shawn D. Shook lead the field with 1,187 votes, followed by John A. Walter with 1,003. Incumbent Judith Cosgray, who was appointed earlier this year to take Joe Farmer’s seat after he was appointed to the State Board of Education, came in fourth with 743 votes. Caryl Caito was third with 854 votes and Barbara Mann was last with 411. Board President Art Brate didn’t seek reelection, deciding to retire after 24 years of service.

In the only county-wide race, voters, after 11 attempts, finally approved a .4 mill levy for 10 years for Fairfield County Historical Parks. It was an “approve or die” measure for the parks and voters responded with a 26,117 to 21,466 vote.