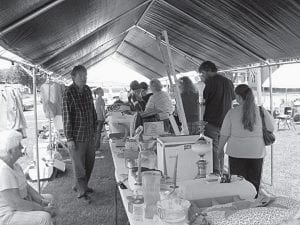 U.S. 40 – The massive U.S. 40 community yard sale technically didn’t begin until Saturday, but why wait? Brilliant sunshine beamed upon U.S. 40 Friday between Jacksontown and Hebron, where dozens of yard sales sprung up like dandelions in a back lawn.

“We’ve been here since Wednesday,” said Patty Price, a Columbus resident who set up shop in downtown Hebron with her friend Ann Pierson from Glenford. “This spot is ideal,” said Pierson. “Everyone in Hebron is really nice. You meet a lot of interesting people.”

By early Friday afternoon, Randy Swingle, a Crooksville resident with an excellent location in the side yard of his son’s Jacksontown home, had more than 100 patrons. “We never dreamed it would be like this,” he said. “I need more stuff for tomorrow!” Swingle used to own a consignment shop and had lots of things to sell, including pottery, which people were literally buying by the box. He was even getting bites on a speedboat and a Mazda Miata sports car he was selling. 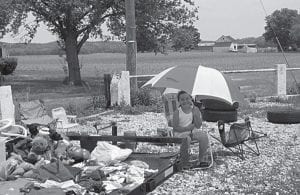 Down the road a bit, across from Lakewood Middle School, young hawker Kayleigh Balsley sat beneath an umbrella to shade herself from the sun as Lisa Tankovich hurriedly filled a flatbed trailer with sale items. “I haven’t even had time to put prices on things,” she said. “As soon as I’d take it out, it would sell.”

Tankovich worried rubberneckers slowing to see what was available at the various yard sale sites were causing traffic problems and possible accidents on U.S. 40. Literally thousands of people shopped and sold on U.S. 40 between Jacksontown and Luray – the intersection of U.S .40 and Ohio 37 – during the weekend.

Bowling Green Township Trustee Jeff Chorpenning, who is very involved in the yard sale and helped to establish the event’s web site, ohio40.com, said the yard sale is gaining popularity, even though it doesn’t receive the press coverage of previous years; the yard sale’s first year was also U.S. 40’s bicentennial. Chorpenning said Licking County is one of the sale’s most active counties. This year, Licking County Commissioner Doug Smith coordinated a cruise-in of historic vehicles on U.S. 40 Sunday, traveling west from Jacksontown. The trustee hopes Smith would continue to sponsor the even in upcoming years.

Chorpenning said it was “impossible to estimate” how many vendors and patrons there were, but he believes the generally mild weather – the best in the three years of the event, he said – contributed to this yard sale’s success. “There were so many (people) we couldn’t count them,” he said. Chorpenning and others will meet soon to review the events from this year and plan the 2009 yard sale. “We’re always looking at the next year,” he said.