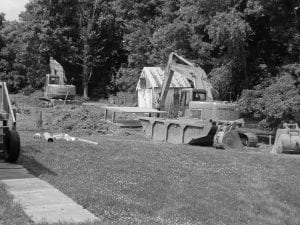 GLENFORD – Nineteen years after it was first proposed, the Village of Glenford is installing a sewer system.

“When the EPA tells you to do it, your hands are tied,” said Glenford Mayor Leonard Sheppard, who’s personally worked on securing grants and funding for the new $2.25 million sewer system for seven and a half years. After securing four different grants for the project, construction began June 2. Sheppard said he plans for the crews to finish installing the collection pipes by Christmas and for residents to be hooked up to the system by next summer. “We hope, anyway,” he said.

Sheppard said Northern Perry County supplies the village with clean water, but Ohio EPA has insisted for a long time that the village install a public sewer system. Residents whose properties come within 200 feet of a sewer line will be required to connect their homes to the public sewer system. “That’s the law,” said Sheppard, who added that roughly 60 houses would likely connect to the system. He said right now he expects customers will have to spend about $40 to $50 per month for public sewer service, although that amount could change as the project continues. “We won’t really know until the project’s about halfway over,” he said.

Sheppard said all village houses, except one, have been paying a monthly fee toward tap fees and shouldn’t expect to have to pay a lump sum tap fee when it’s finally time to connect to the system.

Sheppard said the Village of Glenford would operate its own sewage treatment plant and will be looking for an operator with a Class 1 license about halfway through the project.

So far, Sheppard said the project is going smoothly and on schedule despite muggy heat constant rainfall. “It seems like it rains every 24 hours,” he said.

“It’s been a long process,” said Perry County Commissioner Jim O’Brien. “The commissioners are thrilled that it’s finally going into the ground.” He said Glenford applied for grants through the county and even though the EPA is mandating Glenford’s sewer system, Glenford still had to endure some grants being turned down until they finally came together.