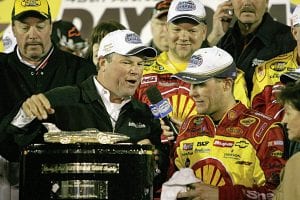 
DAYTONA BEACH – When Robin Braig was a student at Hebron’s Lakewood High School, he dreamed of being a basketball star. Instead, he grew up to be president of Daytona International Speedway and today he’s ready to host the 50th Daytona 500. Granted, basketball stardom eluded him, but looking back on a career that’s led him to manage arguably the world’s most anticipated race at the world’s most famous racing facility, he couldn’t be happier with the road he chose.

"My mom (Buckeye Lake’s Donna Braig) has been my mentor," he said. "She encouraged me to have an alternative to basketball." He’s glad she did. Monday, Robin Braig paused for a phone interview while preparing the Daytona International Speedway for its historic Feb. 17 race. 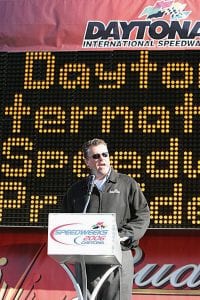 "You only get one chance at a fiftieth anniversary," he said, and he intends to do it right. In addition to exciting racing, this year’s Daytona 500 features performances by Brooks & Dunn, Michael McDonald, Kool & the Gang and others, and Braig will bring together all 24 surviving winners of the Daytona 500. "They’re characters within themselves," he said, adding that all the past winners are fun and sociable. Braig even managed to find many of the old winning cars- –some of them still run, some of them don’t, he said. "The racing speaks for itself." Some of the track, including its guardrails, is adorned in gold to commemorate the event’s golden anniversary and the classic silver winner’s trophy will be golden for this race only.

Braig’s not surprised the half-century old race still attracts a sell out crowd every year. Of course, fans flock to the track to cheer for their favorite drivers, but he realizes that they’re also there for the sunshine. "It gives people digging out from snow a chance to enjoy some nice weather," he said. Also, NASCAR’s popularity has grown exponentially since he was named president of the speedway in 2002.

Braig said television contracts have helped make NASCAR incredibly popular. There was a day when a racing fan had to search for races on cable. Today, NASCAR races are "on about every channel," he said. "They spread the gospel of NASCAR."

Ironically, although Braig spends most of his time around fast cars, he drives a Chevy Tahoe SUV company vehicle and never really feels the "need for speed" himself. He’s actually a huge fan of boat racing, which he attributes to his Buckeye Lake roots. In fact, his love of boat racing, in a roundabout way, eventually brought him to Daytona.

Braig has already experienced many things he’ll never forget as president of the Daytona speedway, including hosting President Bush for a race two years ago. "It was great to host the leader of the free world," he said, "but it was a lesson in security." Of the many NASCAR drivers Braig has met, he won’t hesitate to say that Kenny Schrader is his favorite. "I named my dog after him," said Braig.

The future is very bright for the Daytona International Raceway, where Braig said more grandstands will be built along the front stretch and a $450 million Daytona 500 themed mallincluding a theater and a mini theme park-is slated to be built within the next several years.

Braig’s sister J-me, a Buckeye Lake native and director of the Buckeye Lake Museum, is thrilled she and her daughters will see Robin in action this month. J-me admits that while she’s been to the Daytona Speedway in the off-season, this will be the first time she’s watched a Daytona 500. She did, however, take advantage of access to sporting events when her brother worked for Anheuser-Busch. "Now I can’t just go to a game and sit in regular seats," she said.

J-me rooted for her brother during his basketball days, but said she’s extremely proud of where Robin’s career has taken him. "His work ethic has always been strong," she said, adding that her brother has always had the ability to enter an organization and make changes while also making friends in the process. She wonders sometimes if her brother realizes what a prestigious position he has and how impressed his hometown is with him.

Unfortunately for J-me, her special access to sports events ended with Robin’s job at Anheuser Busch. Even though her brother is president of the Daytona International Speedway, "He still makes me buy my own tickets," she said.