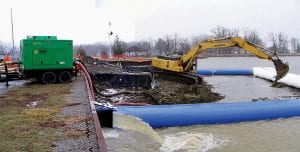 BUCKEYE LAKE- The North Shore Boat Ramp will look much different by May. Buckeye Lake State Park Manager Tim Waln said access and parking are being upgraded and new boat ramps, including a new third ramp, are currently under construction.

Right now, a gigantic earthmover is tearing out the old boat ramps, which Waln said were steeper than most. They’ll be replaced with three new ramps at a 15 percent grade, similar to most Ohio state park launch ramps. When the asphalt plants reopen closer to spring, Waln said work would begin on parking lots and access.

A major change, said Waln, is the addition of a left turn lane at the park’s exit. Plenty of patience is often needed to turn left onto SR 79 from the park because of the unusual intersection where neither southbound nor northbound traffic stops. Turning right from the park, however, is much easier and motorists waiting to turn left will no longer block drivers turning right. 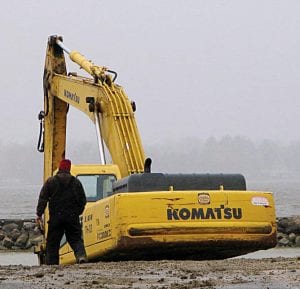 Waln said there will be two entrance lanes leading to the new boat ramps from SR 79 with rigging lanes on both sides of the two-lane entrance. Waln said the lines of boaters waiting to launch will move much more quickly with the extra lanes and ramp.

Once the boats are launched, parking will be much easier as well, said Waln. The two existing parking lots that can handle about 60 vehicles with trailers will be expanded to accommodate nearly 100 vehicles with trailers. Fifteen parking spots will be 50 feet for really large vehicles and trailers. Waln said some drivers of large rigs were forced to drive over the parking curb to keep the back of the trailer away from traffic. The parking spots will have more of an angle, too, for easier entrance.

Waln said the North Shore Boat Ramp will be closed for about a month this spring to complete repaving. He said the repaving can’t happen during winter months because asphaltmanufacturing plants are closed for winter. 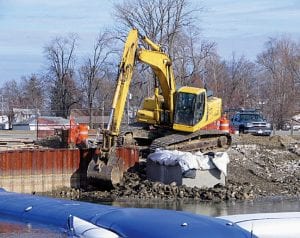