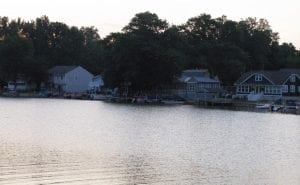 BUCKEYE LAKE – The Beacon has discovered that ODNR plans to “separate Crane Lake from Buckeye Lake” as part of the Buckeye Lake Dam Rehabilitation Project.

Crane Lake’s fate has not been publicly disclosed or discussed. The Beacon’s discovery came during its late Wednesday night review of Lawhon & Associates, Inc.’s application, under contract to Gannett Fleming and Michael Baker International, for a Section 401 Water Quality Certification on behalf of ODNR.

Due to the late hour and the impending Ohio EPA public information session and hearing next Monday (June 26), neither ODNR nor dam project spokesperson Ian Nickey had an opportunity to comment. The Ohio EPA sessions start at 6 p.m. at Millersport Elementary School.

Section 404 of the federal Clean Water Act requires the U.S. Army Corps of Engineers to issue a Section 404 permit before dredged or fill material may be discharged into waters of the United States. Due to the claimed threat to public safety, the Corps issued a Letter of Permission in July 2015 allowing Phase I to proceed without the required 404 permit.. That emergency authorization expired on 12/31/16, but on 12/5/16 the Army Corps renewed it for an additional year, expiring on 12/31/17.

The Army Corps noticed ODNR’s Section 404 application on March 31, 2017, and accepted comments until April 29, 2017. The state environmental regulatory agency, in this case Ohio EPA, must issue a Section 401 water quality certification before a Section 404 permit can be issued.

Lawhon’s Section 401 application on behalf of ODNR runs over 100 pages. The application and the extensive technical support information is available on Ohio EPA’s Division of Surface Water’s website: www.epa.ohio.gov/dsw/401/permitting.aspx

The entire package consists of seven items. The reference to Crane Lake was in Item 5: Proposed Project Anti-degradation Analysis. The plan to separate Crane Lake from Buckeye Lake was made by ODNR and its lead engineer on the project, Gannett Fleming. It is NOT an Ohio EPA or Lawhon plan.

Unlike lake residents and ODNR’s handpicked advisory council, Lawhon had to have full access to the dam reconstruction plans to complete the Section 401 application.

The disclosure came in the description of Phase II Design & Construction, specifically the use of additional fill, most of which will be temporary. The Crane Lake work was described in one paragraph quoted below:

“ The existing pedestrian bridge at Crane Lake would be temporarily removed and a seepage cutoff blanket would be installed on the lakeward side of the existing control structure. Impervious fill overlain with riprap would be discharged into the channel to maintain stability and prevent erosion from wave action. Additionally, steel sheet piling would be driven to separate Crane Lake from Buckeye Lake (emphasis added) and prevent seepage through the dam. A temporary causeway would be constructed within Crane Lake and temporary access fill would be discharged within Buckeye Lake to facilitate construction in this area.”