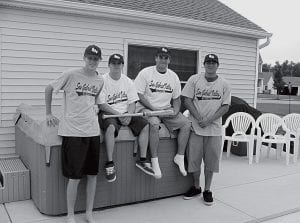 “I wish more people in Hebron would do this. It’s fun,” said Pat Lyons.

Joe Lyons, who is Lakewood’s junior varsity baseball coach, explained that he used to play traveling baseball like Kennedy and Somley, and some of his out-of-town tournaments were jeopardized by a lack of places for the players to stay. The Lyons never hesitate to open their home to out-of-town players.

Neither do their friends, Bob and Theresa Gilbert, who hosted Arcadia natives Max Valerio and Corwin Kim, who also play for the San Gabriel Valley baseball team.

Kennedy hopes the Babe Ruth League is just the beginning of a professional baseball career. San Diego University may offer him a scholarship. “It’s absolutely my dream to go to the pros.” Particularly to play for the Houston Astros because he grew up in Texas.

Somley, who will be a high school junior, may be the youngest member of the San Gabriel Valley team at 16 years old. He hasn’t thought about what he’d like to do beyond high school yet.

Valerio is an East Los Angeles Community College student who would like to play baseball–for now–at a Division I university. He doesn’t care where he eventually plays pro baseball as long he’s playing. Valerio is a fan of the Oakland As and the Dodgers.

Kim is attending Rio Hondo Community College with an undeclared major. Like Valerio, where he plays professional baseball isn’t as important to him as just being able to do it.

As of Wednesday morning the San Gabriel Valley team was undefeated in World Series play.