We’re half way there! 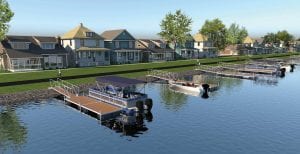 ODNR dam design rendering with a cautionary note that “docks are representational only.” Courtesy ODNR

ODNR finally installed the ‘stop logs or bars,’ stopping the outflow of water through the AMIL spillway in Buckeye Lake Village. Up to the 7:45 a.m. installation, the lake level has been relatively steady for the last several weeks at around 889.1. That’s about seven inches above ODNR’s new ‘winter pool’ and about 17 inches below the interim summer pool of 890.50.

Thanks to a major boost f rom Mother Nat u re, the lake level reached 889.55 by midnight March 1. That’s slightly over half the way to the interim summer pool. Though there is no snow bank to melt this year, barring an unprecedented spring drought we should reach the 890.5 target by May.

The trick will be maintaining that level so we can have a full recreation season (May through october). The issue is evaporation. In January, ODNR said, “Allowing the pool to rise significantly above the target interim pool level for an extended period of time to counteract possible summertime evaporation would increase risk above tolerable levels.” 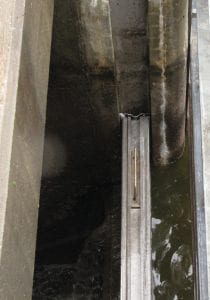 At left, is a top view of one of the metal stop logs or bars installed Wednesday morning. Above, is the most recent lake level graph.

If these drain action levels are followed strictly, it becomes very difficult to achieve an evaporation buffer exceeding three inches. That and more can be lost to evaporation in a dry week in 90’s. A couple of those weeks or a hot and dry July or August could end the boating season in mid-season. 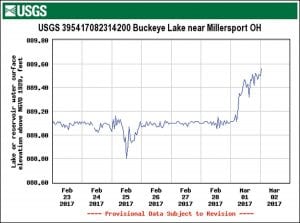 More details about the final design also emerged March 1 via a construction update and an advisory council conference call. Here’s the highlights:

• Each dam-side home will have at least one dock. ODNR will provide a concrete pad in front of every home to attach a gangplank to the dock. The final dock design – floating or fixed and dimensional limitations – hasn’t been set. Nor has the issue of more than one dock for property owners with large frontage.

• The plan to remove the approximately 15 feet of the stability berm on the lake side of the seepage barrier has been dropped. That area will be sloped more toward the lake and the existing rip rap will be upgraded with larger stone.

• All the turn-around areas created during the berm construction will be removed except at Seller’s Point and at the Black Diamond wreckage site.

• The seepage barrier and the to-be-built buttress wall will be capped with concrete for overtopping protection. That concrete cap will be covered by a 12-foot wide asphalt road or walkway that will be used by maintenance vehicles, cyclists and walkers/runners.

• Construction mobilization will start in April. The buttress wall will be built via soil mixing – the same process used to build the much narrower, but deeper seepage barrier. The exact dimensions of the buttress wall have not been released but the width appears to be 10 to 15 feet with depths up to 20 feet.

• Construction activity will typically be one 12-hour shift Monday through Friday.

Two“listening sessions” are scheduled for next week. T hey w ill be hosted by “representatives of ODNR, the engineering firm Gannett Fleming and the contractors ASI Constructors…to share information with residents and stakeholders.”

The construction update states that “participants will have the opportunity to speak individually with subject matter experts on various topics of interest.”