Warm winter may not be good for plants

Story and photos by Scott Rawdon 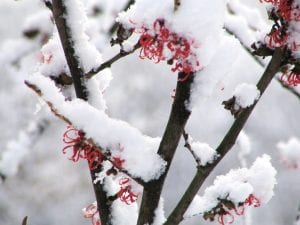 JACKSONTOWN- It can’t be good: Winter’s unseasonably warm weather is fooling many plants into believing it’s spring, and now some are budding and blooming early or poking though Monday night’s snowfall. Actually, Mike Ecker, Dawes Arboretum’s director of horticulture, said that most plants can handle sprouting early without too much problem. Ironically, it’s the warm weather that really gives them grief. Plants survive cold weather in the same manner as many animals by hibernating. Ecker says it’s important for plants to experience steadily dropping temperatures so they’re good and “asleep” by the time the mercury plunges below zero. Warm winter weather, like type we’ve experienced for most of this season thus far, won’t allow plants to fall into their deep dormancy so when the frigid temperatures finally hit, the plants aren’t ready. “You can worry about it if you like, but there’s not much anybody can do,” said Ecker. Fortunately, he does have a tip for saving perennials from alternately freezing and thawing soil. Warm winters often mean temperatures will rise above and fall below 32 degrees, sometimes from day to day. As the soil expands and contracts, it gradually forces perennials out of the ground. When the cold hits the roots, it’s lights out for the perennial. Ecker suggests covering perennials with pine branches. 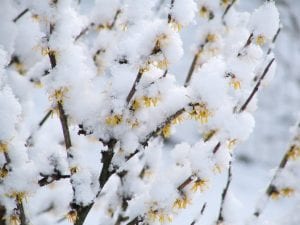 The branches allow air flow beneath them to prevent root rot, but they also hold cold beneath them so the soil temperature doesn’t fluctuate to such extremes. Older perennials adapt better to warm winters. Ecker said they hold more energy than younger plants and are better able to refoliate themselves if they bud early, then get hammered

by snow and cold. Dawes’ daffodils and especially the Witch Hazel are the most easily duped. Ecker said the Witch Hazel normally blooms in February, but it’s been blooming through the holidays. It may not bloom much more this year, but he doesn’t expect the early bloom to do any permanent damage. “They’re at the whim of the weather,” he said. If the local winters continue to be warm, some trees, like the Sugar Maple, may migrate further north, but again, “There’s nothing we can really do for the trees,” he said. “That probably wouldn’t happen in my lifetime. It’s many years getting progressively warmer that really affects them.” Who knows? He said, “The winters may start getting colder.” 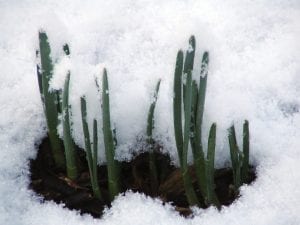 One response to “Warm winter may not be good for plants”