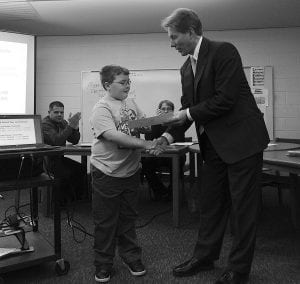 Monday morning before school, Tyler walked into Superintendent Randy Cotner’s office. The district office is housed in the elementary school. Tyler had a zip-lock plastic bag of coins, Cotner said, that he put on Cotner’s desk. “I want the school district to have this,” Cotner heard. Tyler had saved the money from doing odd jobs and his allowance. The coins totaled just short of $34. “I was stunned,” Cotner said.

Wednesday evening, Cotner presented Tyler with an Anchor Award for his generosity and commitment to his school. Tyler received a standing ovation from the nearly three dozen present for the board’s budget cutting work session.

“We are currently in fiscal caution,” Cotner told board members at the start of the budget work session. The Ohio Department of Education’s letter was received Dec. 16. “We have until June 30 to solve that roughly $100,000 deficit,” Cotner explained. The district’s fiscal year ends June 30 and state law prohibits school districts from running a deficit.

Before discussing additional budget cuts, Cotner addressed three grants the district has received this year. “There are too many stories going around that just aren’t true,” he said. He urged anyone with questions about the district’s finances to bring them to him. The district has received about $432,000 in grants through the Fairfield County Education Service Center this year. None of the grants pay for teachers or district operating expenses. Grant money can’t be spent on anything except the specific grant, Cotner emphasized. “That money doesn’t even come to us,” district treasurer Kirk Grandy added.

Cotner said some community members question the need for additional taxes since the district is getting grants. Others would question why the district didn’t seek grants to improve programs. “We did go after that money and we are putting it to good use,” Cotner said.

The current focus is on cutting the budget by at least $92,652 by June 30. The Ohio Department of Education is starting a staffing analysis which may be available by the board’s January meeting. Once that analysis is in hand, board members will start the much harder task of cutting about one million dollars out of a seven million budget.

The budget reduction goals are fluid, Cotner explained. On the positive side, the district could get a significant amount of the current $500,000 in delinquent taxes due it, he said. On the other hand, the high school’s aging boiler could fail this winter, costing the district tens of thousands to repair or replace it.

Last week, board members approved about $77,000 in budget cuts over the next six months. Cutting bussing to one route limited to K-8 students will save about $40,000 and not filling a vacant central office secretarial position will save about $37,000.

• Effective Jan. 1, 2015, stop paying for transportation for extra-curricular activities like athletics to save $7000 for the winter season.

• Stop paying for transportation for spring extra-curricular activities to save $14,000.

• Begin enforcing a 2008 board policy setting facility use rates. No income estimate was provided. The fee schedule set in 2008 ranges from $360 for the high school commons/kitchen/gym to $25 for a classroom. The elementary gym or auditorium is $115 per day or $150 for both. The high school gym is $280, the football stadium is $200 without lights or $250 with lights. The track is $100. Board member Karen Keller questioned whether the fees actually cover the cost to open the facilities to outside groups. The board’s facilities committee will take a look at updating the fees in January.

Cotner said continuing transportation for extra-curricular activities when you’re not bussing high school students to school doesn’t make sense. He said it costs the district $4.52 per mile to operate a school bus. Forfeiting away games doesn’t make sense, Grandy said, since game contracts often include a $500 forfeit fee. Board members weren’t comfortable forcing students to get to activities on their own, so the discussion focused on how to pay for bussing. The athletic boosters pledged $3,000 for the winter season and believe individual coach’s funds could pay transportation fees for students that can’t afford them. Several board members were concerned that participants in fall activities didn’t have to pay anything.

Cotner said that 21 of the 23 districts in the Mid State League have some type of fee – pay to participate or a transportation fee. Millersport is one of the two without fees.

A motion to charge a $75 transportation fee for winter activities was proposed. An amendment reduced it to $50, but it failed on 2-3 vote, with Popo, Keller and Tom Cumbow voting “no.” Board members will take another look at the issue in January. No action was taken on the issue for spring activities.

Board members approved enforcing the facility use fee policy and moving some maintenance/custodial expenses out of the general fund into the food service fund by a 3-1 vote. Popo voted “no” on both issues.

Board member Carol King recommended that no more comp time or overtime pay be approved. President Faye Whitaker said that her suggestion and some from Popo will be discussed at a future meeting since the June 30 reductions have been met.

Cotner warned board members of the task ahead. “A million dollars out of a $7 million budget is virtually insurmountable,” he said. “The next round is much more difficult.” He observed early in the meeting that the district “could go right from caution to emergency,” skipping the intermediate financial watch stage.

The board’s next regular meeting begins with the annual budget hearing at 6 p.m. on Monday, Jan. 12, immediately followed first by the reorganization meeting then the regular January meeting. Whitaker appointed Cumbow to serve as President Pro-Temp for the reorganizational meeting.