No wake zones to be photo enforced 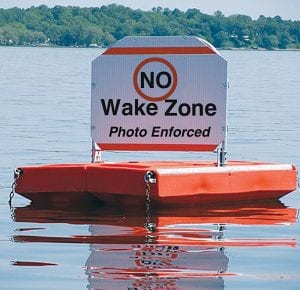 BUCKEYE LAKE – Be sure to smile AND watch your wake when you pass Cranberry Bog this boating season.

If you aren’t watching your wake, the latest innovation from the burgeoning photo enforcement industry will be.

Redflex Traffic Systems of Phoenix, AZ, has teamed up the Ohio Department of Natural Resources Division of Parks and Recreation to install the first ever marine application of the so- called “red light” cameras. Up to this point, the photo technology, which is used worldwide and in 28 states, has been used to monitor traffic lights and speed limits.

The controversial cameras have been criticized as being pr imar y used to generate revenue rather than improve safety. Cameras first appeared locally in 2009 along Ohio 79 in Heath. Upset Heath voters banned the cameras via referendum on Nov. 3, 2009, and tossed out the incumbent mayor for good measure. The City of Columbus installed 20 cameras in 2006 and 2007, and now has 38. Columbus raked in $2.1 million last year as their share of the $95 tickets sent to violators. 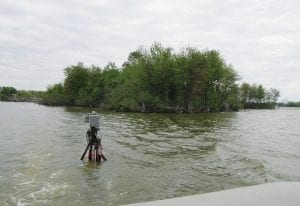 Division of Parks and Recreation off icials aren’t bashful about acknowledging the revenue raising potential from the two to four cameras expected to be installed. “Our primary objective is trying to keep Cranberry Bog intact,” Regional Park Manager Hal Harper told The Beacon. “But we can’t ignore our deteriorating financial situation.” Unlike the Division of Watercraft, which is funded by boat license fees, Parks and Recreation doesn’t have an earmarked revenue stream and its few fees – from camping and docks – cover just a small portion of the division’s expenses.

No-wake zones have been in place for years on both sides of ever-dwindling Cranberry Bog. While some boaters religiously comply, ODNR officials estimate that as many as 70 percent of the boaters do create a wake when passing by the bog. Wave action caused by noncomplying boaters contributes to the breakup of the originally 50-acre bog that is now down to about seven acres. 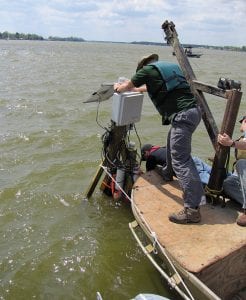 The State Nature Preserve is Ohio’s only bog island and its flora includes rare orchids and carnivorous plants. “It really is a national treasure,” Greater Buckeye Lake Historical Society director J-Me Braig said. The Historical Society now manages the bog for ODNR and conducts bog tours during the summer.

“Nobody else has a bog quite like it,” Braig added. “We have a responsibility to maintain it for future generations.”

The historical society and the recently reactivated Friends of the Bog are trying to control the growth of invasive plant species, particularly poison sumac and water maple trees. “It’s a never ending battle,” Friends coordinator George O’Donnel said. “But it is worth the effort. It is too valuable to let inattentive or reckless boaters tear it up.”

The cameras use an early, civilian version of defense contractor Raytheon’s Hawk-Eye photo reconnaissance system. “The military version can read a license plate on a truck in Afghanistan from 600-1,200 miles up in space,” Redf lex Technical Manager Paul Payupp said. “So it won’t be a problem to capture the boat registration number up to two to three miles away.” 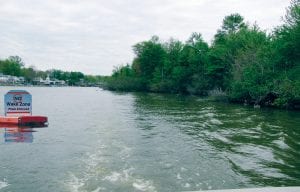 “Hawk-Eye Lite,” as Payupp calls their technology, has enough resolution to determine whether a beverage in a cozy holder is alcoholic or not, and even its brand. “All it needs to see is that inch or so of the can peeking out the top of the cozy,” Payupp added.

While the focus will be on no wake violations, the system will also monitor for open container and consumption violations. “For example, if Hawk-Eye captures a can of beer or a bottle of wine in a cup holder or on a table or counter, that will be an administrative penalty,” ODNR Law Enforcement Supervisor Harry Callahan explained. “But if that can of beer is in the hand of the watercraft operator, we will pursue it as a criminal violation.” Administrative penalties for possession of alcohol on a watercraft start at $250 and go up to $1,500 depending the number of past offenses, he said. Administrative penalties will be assessed against the watercraft’s registered owner. 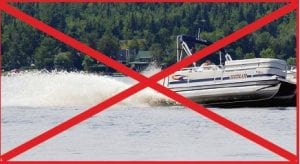 Cr iminal penalties for operating a watercraft while per sonally possessi ng a n alcoholic beverage begin at $500 and go up to $2,500 and up to 30 days in jail. These penalties will be assessed against the individual identified in the photo. If identification can not be made, the penalty will be assessed to registered owner.

No-wake violations start at $100 for the first violation, but could reach $500 after four violations. “While we can put your money to good use,” Harper said. “We prefer you just slow down and keep alcohol off the lake.” Fines up to $150 are split 50:50 with Redflex which pays for all expenses except the final law enforcement review. ODNR will get 60 percent from $151 to $499 and 75 percent for those $500 and above.

“I know this sounds like we’re going to be hard-*##%#,” Callahan told The Beacon. “We’re just going to be enforcing existing laws (no wakes and possession of alcohol). The only difference is Hawk-Eye will always be watching.”

Hawk-Eye uses a special fisheye lens so it takes concentric photos, capturing everything around it, Payupp said. “Don’t even think about trying to vandalize it,” Callahan warned. “Hawk- Eye will have dozens of photos before you get within 100 yards. Besides, it’s a second degree felony that could send you to jail for five years.”

Here’s how it will work. One camera module has already been installed. The second one should go in next week. “Hopefully, weather will cooperate,” Payupp said. One new warning buoy (see Page 1 photo) is in place and at last three others will be installed before the system goes live.

The camera modules will take photos on a set schedule that Payupp says is proprietary. Internal software will discard blank photos. All other photos will be uploaded four times a day to Globalstar’s Second Generation Constellation of satellites. The final six satellites were launched February 6, from the Baikonur Cosmodrome in Kazakhstan.

The new low earth orbit network will send the photos to Cyfuture in Jaipur, Rajasthan, India. The IT focused call center will do the first cut reviews of the photos and provide customer service. “We don’t have the staff to make the first reviews,” Callahan explained. “Plus using Cyfuture is a lot less expensive than adding employees in Ohio.”

Photos documenting possible no wake or alcohol violations will be sent to Ohio using the same Globalstar network for review by a Division of Watercraft officer. “We might deputize some local law enforcement officers to make the final determination,” he said. “The Buckeye Lake Police Department is interested as a way to offer some pay to their reserve officers.” Violations will only be issued after a law enforcement officer has reviewed the photo. “Cyfuture won’t be making the final call,” Callahan emphasized.

However, Cyfuture will be the first point of contact for any questions about violation notices. They will be accessible via a tollfree phone number or an on-line chat service. “We are putting our best staff on this project,” Cyfuture managing director Sanjay “Marcus” Kaif told The Beacon. “Our team is experienced with foreclosure counseling.”

To ease possible tensions, Kaif said call team members have decided to use the first names of OSU football players in their conversations. The names are Braxton, Jamal, Jordan, Marcus, Ryan and Zack. They even plan to watch some games from last year’s undefeated season. “They should have played in the championship,” Kaif added.

Data synchronization from the first photo module to the Globalstar Constellation is set for April 1 (April 2 in Jaipur). The first two cameras should be live by Full Pool. Don’t forget Hawk-Eye will be watching this year.