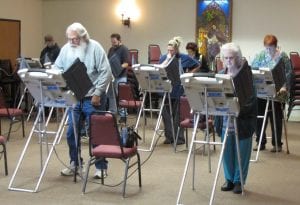 Come January 1, Baltimore Mayor Bob Kalish will be out of office for the first time in 34 years. He served as a village council member from 1982 to 1999, starting a 16-year run as mayor in 2000. He also served as president of the Ohio Mayors’ Association during his tenure as Baltimore mayor.

“Thanks to my supporters during my terms as mayor,” Kalish told The Beacon Wednesday morning. “I want Baltimore to prosper and I will still stay involved. I wish all those elected in the Village of Baltimore the best of luck.”

Several attempts to reach Mayorelect Nicodemus weren’t successful. He is a practicing attorney with a West Market Street law office. 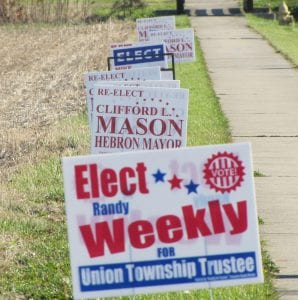 Nicodemus also wants “to incentivize businesses to return to Baltimore…as businesses return, we can make Baltimore even more affordable for our residents by permitting an income tax break for those living in the Village and working elsewhere.”

In Millersport, long-term council member Gary Matheny defeated Mayor Dean Severance by an unofficial vote of 169-138. Severance has been mayor for 14 years and moved from council president to mayor when former Mayor Dwight Caudill resigned midterm. 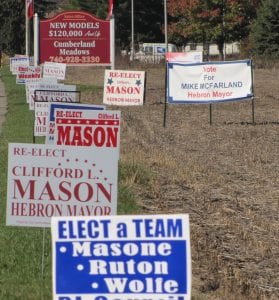 Recently appointed council member Beth Warner was the only council member on the ballot. She was elected to a four-year term with 191 votes. Three write-in candidates, James McKittrick, Linda Willison and Michael Yates, were vying for four-year terms to replace Bidwell and council member Dave Sherrer who didn’t seek re-election. McKittrick lead the write-ins with 47 votes, followed by Willison with 21 and Yates with eight. McKittrick and Willison will replace Bidwell and Sherrer. A fourth council seat will be available Jan.1 when Matheny resigns to become mayor. There are two years left on his council term.

Matheny has served on council for 18 years and has been Safety Committee chair for most of his tenure. He recently retired from The Kroger Company after 39 years service where he served on the union negotiating committee for 25 years. Matheny has been a strong supporter of the village’s aging pool both on council and as a volunteer for fundraising and maintenance efforts.

He promised to be a “hands-on mayor.” Matheny added, “I don’t want to let anybody down. I’m looking to build up Millersport’s future. We need families and kids. We need to provide facilities to attract them. We have little to offer kids now.”

Matheny also thanked everyone who helped elect him. “I want to support our businesses and attract more,” he said. “I want to get us back to where we used to be.”

The two lake area school districts in Fairfield County were sharp contrasts this election. In the Liberty Union-Thurston School District, incumbent board members Shawn D. Shook and John A. Walter M.D. were not challenged. Shook received 1427 votes and Walter garnered 1302.

Popo lead the field with 791 votes for his third term. Armstrong was second with 740, closely followed by Keller with 733, Thompson with 653 and Whitaker 595.

“I want to thank all the voters who sent me back for a third term,” Popo told The Beacon. “I also want to thank Faye for her 12 years of service to the district.”

Popo said his first priority is “to continue to stretch our taxpayers’ dollars as far as possible.” He thanked voters again for approving an additional levy in August that pulled the district back from the brink of fiscal emergency and a state-directed takeover of the district’s finances. “Now we can expand our focus beyond finances,” Popo said. “I’m looking forward to expanding our educational opportunities through the new Lake Learning Center. We also hope to expand our athletic opportunities.” The district needs more students to garner a higher percentage of state funding.

In Thurston, Mayor Mary Boring ran unopposed as did Aaron Reedy for clerk-treasurer and Jo- Ann Hite and Robert Ortman for village council.

There were no local levies on lake-area ballots in Fairfield County. County voters approved a Board of Developmental Disabilities additional 1.85 mill levy for 10 years by a 22,173 to 19,531 vote.