By Charles Prince and Scott Rawdon 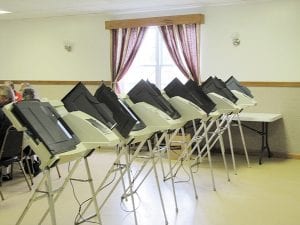 LANCASTER, NEWARK – Lakewood Superintendent Jay Gault said his district’s levy win Tuesday night was impressive on two levels. “That levy was of epic proportions in Lakewood last night,” he said. Voters approved Lakewood’s 5.24 mill, five-year emergency renewal levy 1071 for the levy to 722 against, or 59.73 percent to 40.27 percent, according to unofficial results.

Gault said this was a first time a levy passed on its first attempt for as long a he could determine (back through the 1970s) and it won by the widest margin of any other Lakewood levy based on percentage.

Plaisted explained the full amount of the levy renewal is $2,353,259 but the taxpayers will pay $2,058,646. The difference, she said, is a $ 294,613 reimbursement from the state. “If the school district continues to renew this emergency levy the state will continue to pay the tangible personal property reimbursement amount attached to this levy,” she said. 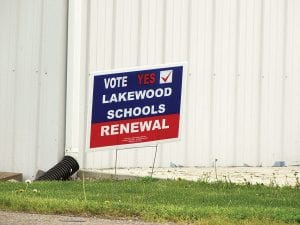 She added that -based on the district’s five-year financial forecast -with the levy passage, the district won’t need to return to the ballot for five years, assuming there are no significant cuts in state or federal funding.

“It’ll be a long time before Lakewood’s back on the ballot,” barring anything unforeseen, said Gault. “It was a low voter turnout, but anytime you can win by that large of a margin, that’s huge.” He said only 18.3 percent of registered voters voted on the levy, which can be bad for levy passage because those opposed are more likely to travel to the polls.

Gault said as it was in 2003 and 2008, this levy was renewed for general operation of the district only. “The community gave us the ability to continue operating,” he said, “to continue doing what we’re doing.” He said a loss would have force the district to cut $2 million from its budget. “The other side would be ugly,” said Gault.

Board member Forrest Cooperrider said even with the reduction in millage, he wasn’t certain the levy would pass. “I’m sure we all feel pretty good about that, especially with such a large margin,” he said. “It’s enabled us to continue in the same manner that we have.”

Board member Tim Phillips, on the other hand, was confident in a win. “I thought it would pass,” he said, especially considering the reduction in millage. “It seemed practical that people would look at it in a positive light.”

There were broad smiles in Walnut Township Wednesday mor ning. A 1,336 to 806 drubbing last November turned into a very narrow 326-304 win.

Voters were asked to replace a 10-year 1.25 percent school district income tax with a 10-year 1.75 percent tax on just earned income. The new tax will continue to raise approximately $1.2 million per year for operating expenses. It represents 18 percent of the district’s budget.

The original tax applied to investment income, unemployment benefits, pensions, and alimony payments. None of them will be taxed under the replacement tax that’s effective Jan. 1, 2014. The tax rate had to increase as the tax base was limited to just wages and salaries, tips and selfemployment earnings.

“We were simply trying to maintain what we have,” Superintendent Dale Dickson told The Beacon. “It was so critical to maintain that $1.2 million…We’ve cut about all we can possibly cut. We can’t cut our way out of this problem (loss of income tax revenue).”

“We are blessed to maintain what we have,” Dickson said. “It was very big.”

Board President Faye Whitaker said, “I am extremely happy and thankful to everyone that supported the levy. We can maintain the same level of funding with a slight increase on earned income while giving senior citizens on fixed incomes a break.”

Board Vice President Vince Popo’s first reaction was “Wow! Wow!” He said the district didn’t have a good real alternative to the replacement income tax. “What are we going to cut?” he asked. Popo still fears for the future of small districts, believing that they may be split up between neighboring districts.

He noted that the school district is the biggest employer in Walnut Township. “We all need each other,” he explained.