Volunteers coming to Baltimore next year 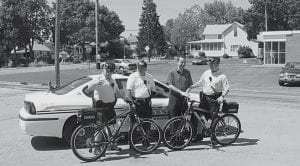 The Baltimore Christ United Methodist Church and the Baltimore Area Workcamp Committee will bring 400 volunteers to town next summer to improve the homes of local residents. Local volunteers are needed, too. This is one of many village initiatives discussed during the Baltimore Community Update held at Liberty Union High School Aug. 14.

“If you know someone in need, pick up an application,” said Christ United Methodist Church Pastor Mike Donnally. “We need volunteers. It’s going to be a very exciting summer for us.”

According to a statement from the church, elderly, handicapped, and lower-income residents of the Baltimore can receive free home repairs. As many as 70 local residents will benefit from the work of a projected 400 adult and teenage volunteers at the Buckeye State Workcamp, coming to Baltimore, June 25 through July 5, 2008. The workcamp will provide free home repairs through the Group Workcamps Foundation program sponsored locally by Christ United Methodist and the Baltimore Area Workcamp Committee.

The Group Workcamps Foundation is a non-profit,interdenominational Christian volunteer home-repair organization headquartered in Loveland, Colorado. This summer, an anticipated 30,000 young people and adults are participating in 64 workcamps in communities across the United States and Canada. At each workcamp, teenagers and adults volunteer a week of their time to repair homes throughout the community, representing about 12,000 hours of volunteer labor worth at least $80,000 to the community, said Donnally.

The workcamp will be housed at Liberty-Union High School, with workcampers sleeping on classroom floors, eating in the cafeteria, and enjoying evening programs in the gym. Donnally said this service to the community would be impossible without the cooperation of Liberty-Union High School. Group Workcamps Foundation will reimburse all costs to the lodging facility.

Repairs offered though the Workcamp include interior and exterior painting, weatherization, porch and wheelchair ramp construction, and other work. Residents interested in applying to receive assistance should contact Donnally at (740) 862-4343.

Although the community update was lightly attended, village officials had plenty to talk about. The meeting’s highlights include:

Police Chief Michael Tussey said the village now has “eyes at night;” most nights an officeris on duty from midnight to 8 a.m., which is something new since he recently took office.”We can see who’s moving about,” he said. Tussey’s goal is always to have a Baltimore cruiser available day and night. So far, he said, “It’s going well.” He’s working on recruiting part-time and volunteer help for the police department. Tussey wants new employees to have experience, even if they’re part-time.

Tussey said he favors “community policing,” or sticking with the old-fashioned method of walking a beat and getting to know the Baltimore residents personally. He said his department is also working with the schools to educate children and parents about subjects like Internet safety. “We firmly believe we’re here to serve the community,” said Tussey. He mentioned that the Lions and Rotary clubs, partnered with the Baltimore Chamber of Commerce, provided the department with bicycles and associated equipment.

Tussey said Baltimore’s crime rate is significantly below the national curve, but acknowledged that Baltimore, like many other villages, still has “issues,” such as transient crime, or crime committed by people from out-of-town. He’s trying to educate citizens not to allow themselves to be victims of crime, mainly through keeping doors closed and locked at most times and, to a reasonable extent, being on the defensive.

Mayor Bob Kalish said in his opening remarks that his goal was for the police department to become a community policing agency and Tussey agreed. Kalish added that Tussey updated the police department web site to enable residents to request a vacation check online, to report illegal drug activity, speeders, and any other public safety concerns. Kalish said residents are also able to pay water and sewer bills online.

Village Clerk/Treasurer Flo Welker said residents shouldn’t be too concerned about an increase in water/sewer bills as the village transitions from finishing upgrades to its sewer plant and beginning upgrades to its water plant. She expects most village households will pay less than $5 more per month. Many homes will see a lesser increase.

Village Administrator Marsha Hall said the village is under pressure from the Environmental Protection Agency to complete upgrades to its water and sewer plants. The upgrades include diverting storm water drainage from the sewer plant, which is very difficult.

Baltimore Village Council member Tony House, chair of the village service committee, said many of the village’s underground pipes are 50 years old. “Our water and sewer bills are high because we’ve put all this off for 25 years,” he said.

Welker added that the street department in particular is “very shy of money.” The current repaving on SR 256 is a state funded project, but House said the village can afford to do little paving unless a levy is passed. “We’re able to do less and less with the money we’ve got,” he said.

“It has been a long wait for our ‘turn,’ but the Ohio School Facilities Commission is now ready to address our district ‘s remaining facility needs,” said Liberty Union-Thurston Superintendent Paul Mathews. He said the original “Master Plan” for LU-T school facility improvements was approved by the State Controlling Board in 2001. That plan called for renovation and an addition for the elementary school building, a new middle school, and renovation to the high school. The projected cost for the original Master Plan was $19.7 million. Local voters approved a bond issue in May, 2002, for 40 percent of that amount. The state share of construction costs is locked in at 60 percent. This “expedited” program allowed the district to spend its local share immediately after passage of the bond issue, so the elementary renovation and addition was completed, even though it was not yet the district’s “turn” for the state share of funding. Mathews believes that the expedited elementary school portion of the project will be viewed as a very cost-effective action. It was completed under budget, and was finished before the onset of unusually high construction industry cost increases in the past two to three years.

Mathews said the Ohio School Facilities Commission “green light” to proceed has several conditions attached to it. Since it has been six years since the original Master Plan was approved, it must be reviewed and updated. To accomplish this, he said the OSFC requires a new student enrollment projection study, an updated environmental hazard study, an updated assessment of district facilities, and an adjustment of cost projections. Not surprisingly, the projected cost of a new middle school has gone up since 2001, he said, because of normal inflation and the unusually high increase in construction costs. “To a degree, this was to be expected,” said Mathews. However, the 2007 revised assessment of the Liberty Union High School building, which will be twenty years old this spring, has increased more than $9 million over the 2001 assessment. “This was not expected, and obviously, forces us to look at several options,” he said. In order to obtain a “second opinion”, an engineering study of the major systems in the high school building will be completed. He said this will provide a much closer look at the renovation needs of the building and is crucial to accurate update of the facility Master Plan.

“We certainly do not want to spend more than necessary for renovation or new construction of school buildings, but we also do not want to be short-sighted,” he said, and fail to take advantage of the district’s one opportunity to have its facilities updated with the state paying sixty percent of the bill. “Our revised Master Plan must be one which will insure that our facilities will serve the needs of LU-T students for the next thirty years or more,” he said.

Mathews said that community members are invited to learn more about the OSGC building program, and to be a part of updating LU-T’s facility Master Plan. This will begin to be addressed at the district’s first Strategic Planning meeting, which is in the high school library at 7 p.m., Thursday, Sept. 20.