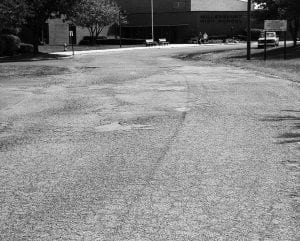 Spires Paving is expected to start resurfacing Laker Drive at Millersport High School next week. If weather cooperates, the project will be completed before school starts Aug. 22. Beacon photo by Charles Prince.

Millersport hopes to satisfy most of its share via in-kind work done by Street Commissioner Gilbert Arnold.

Newton of GGC Engineers recommended that village officials award the contract to Spires based on his firm’s positive experience with Spires on projects with the Villages of Carroll and Thurston. Council members unanimously agreed to suspend the three reading rule and then adopted a resolution awarding the contract to Spires. “Their goal (Spires’) is to get it done before school starts,” Newton said. Walnut Township Schools begin the new school year on Wednesday, August 22.

The project will eliminate the parking spaces on the Laker Drive curve in front of the high school entrance. The existing asphalt will be milled off and replaced with 4-8 inches of new asphalt.

In other business, Police Chief Mark Consolo told council members that he is organizing a neighborhood watch program. He said 19 burglaries had been reported in the past few months. Four were in the village. Consolo believes the program could be up and running in 60-90 days. He is beginning an interest survey and hopes to divide the village into four sections. After gauging interest, Consolo hopes to move to the application stage. Background checks will be done on all volunteers. The project includes development of a phone tree and monthly meetings. Volunteers would have radios but won’t confront suspects. “They are to be extra eyes and ears out there,” he explained. Council members unanimously endorsed Consolo’s plan.

Residents were specifically invited to the meeting to comment on the controversial fourway stop at the Lancaster and Main streets intersection just north of the elementary school. Last October, former Police Chief John Shirk sent a letter to the Ohio Department of Transportation addressing speed limit signage and the length of the school zone on Ohio 204 (Lancaster Street), and its intersection with Main Street. The letter was co-signed by village council members, Walnut Township Trustees and Walnut Township Local School board members. When ODOT created the four-way stop this spring making traffic stop on Lancaster Street, several co-signors including school board President Faye Whitaker protested that they believed the letter would lead to a study by ODOT and some recommendations rather than the immediate creation of a four-way stop. Nearby residents complain that many drivers are ignoring the stop while others make sleep and conversation difficult by loudly accelerating after stopping.

Mayor Dean Severance asked Joe Rutherford, ODOT District 5 Deputy Director, if Shirk’s letter prompted ODOT to conduct a formal traffic study at the intersection. He also asked about a suggestion from council member Donna Thogmartin about ODOT installing a flashing red light or stop sign with red lights that only would be operable during school hours.

Rutherford wrote Severance, “In a nutshell, no formal traffic study was done in response the the concerns raised by Chef Shirk on behalf of the Village of Millersport, Walnut Township and Walnut Township Local School District. However, our traffic did thoroughly review the area in person during peak hour travel, while school was in session.”

“As a result of these visits and resulting analysis, and within the guidelines established in the Ohio Revised Cod and Ohio Traffic Engineering Manual, we decided to change the intersection to a fourway stop. The primary reason is the amount of pedestrian traffic i.e. students that pass through that intersection and the area in general.”

Rutherford added that he and his staff believed local officials “would in full support of this effort.” He said rejected Thogmartin’s suggestion, “We would not endorse, we would not recommend and we would not install or pay for the installation of a variable four-way stop intersec tion.” He added that he doubted that it is even legal.

Severance said ODOT has now agreed to do a formal traffic study when school is back in session. No decision will be made on the four-way stop, he said, until the formal study is complete.

Fiscal officer Susan Ramsey had some good news on the pool. Revenues, which include about $8,000 from fundraising efforts, currently exceed expenses by about $1,800. The pool is scheduled to close August 19, but council members agreed to make two changes in operating hours based on some suggestions from pool members. The adults-only swim will be from 7:00 to 8:30 p.m. on Thursday evenings. The pool will stay open to 8 p.m. for everyone on Tuesday nights.

Severance reported that he discussed the pending C-1 and C-2 liquor permits for the property currently occupied by the Millersport General Store with the Division of Liquor Control. Since the applicant only owns the real estate and not the business, Severance was told that the application would be denied. “There is nothing for us to do,” he said.

Council will return to its regular schedule next month, meeting at 7 p.m. on Tuesday, Sept. 11, at the municipal building.