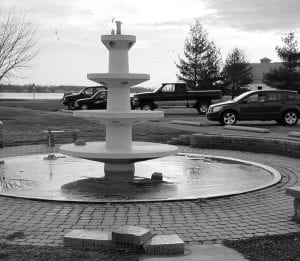 BUCKEYE LAKE- Ohio State Parks spokesperson Heidi Hetzel-Evans confirmed Wednesday that ODNR officials are aware of a rash of vandalism near the North Shore Boat Ramp, including the destruction of two marble benches surrounding a rebuilt fountain on the North Shore. Vending machines and trash containers were also vandalized.

“We are aware of the recent vandalism,” said Hetzel-Evans. “We have law enforcement staff investigating the situation.” Also, ODNR is looking into cost estimates for repairs. She could not comment further.

“I don’t know what to say; I’m so shocked,” said former Buckeye Lake Area Civic Association president Merv Bartholow. He said the vandalism represents thousands of dollars in damages and hundreds of hours of hard work by volunteers, most of them elderly. Bartholow said he expects it will take several months to repair the damage.

Bartholow said the Buckeye Lake Area Civic Association took the lead in revitalizing the fountain and the area around it, noting it was a true community effort with five marinas each donating a marble benches and other organizations donating funds and volunteer labor to the project. Some North Bank residents, who preferred to remain anonymous, have reported finding items from their lawns and deck thrown into the lake overnight and docks vandalized.

Buckeye Lake Police Chief Ron Small said his department is looking into the Jan. 10 destruction of a Ray King sculpture and the damage done to the life-size cows outside the new Buckeye Lake Library. A $1000 reward has been offered for information leading to the arrest and conviction of those responsible. Small was also aware of vandalism to picnic tables Jan. 12, but otherwise North Shore area residents have not reported vandalism to the Buckeye Lake department. He urged them to report such incidents. “We don’t know about them if they don’t call us,” he said. The department also has an anonymous email address for tips. Send tips, photos to buckeyelakepolice@ yahoo.com. All are held in strict confidence.