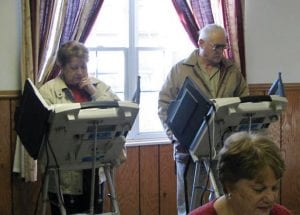 “We’re going to see a lot of change out there, I think for the better,” said Baker. He said he ran because he believes the village’s new public water system will help to usher in more businesses and prosperity to the village and he wants to be part of it. Baker said Wednesday that he was about to speak with Licking County officials about securing part of a $1 million county fund slated for removal of uninhabitable houses.

Hartman predicted Wednesday that the major issues of her term will be completion of the public water distribution system, which is currently being installed, and attracting more businesses to Buckeye Lake Village once the distribution system is complete. “We need to get together on the building code process with (Licking County) and make it more user friendly for Buckeye Lake,” she said. Hartman said she hopes the village can help the Buckeye Lake Museum attract more tourism and she hopes to engage the village’s youth in helping to clean up some Buckeye Lake properties.

Buckeye Lake Village voters were in a generous mood Tuesday night and approved an additional one-mill streetlight operating levy 345 votes to 299, and approved a three-mills renewal levy for police protection and services by a 366 to 282 vote. “We’re very excited about the streetlights,” whose continuing operation is important to the village’s safety and security, said Foster. The village’s streetlights would’ve been turned off indefinitely had the levy failed. Foster said he’s also excited the police levy passed, but it will do little more than allow the police department to maintain the status quo; the levy will not provide significant additional funding to what the village collects for the department now.

Still, “I’m tickled to death,” said Police Chief Ron Small, who said the vote shows that Buckeye Lake residents support the department and the levy allows the department at least to keep what it has.

The Lakewood School District wasn’t quite as fortunate. Its additional 8.9-mills levy was rejected – 1798 votes for to 2972 votes against.

“We have to cut $1 million,” said Lakewood Superintendent Jay Gault. He said he didn’t know where one penny of that $1 million would come from because the school board hasn’t discussed it yet. “It’s going to be a hot item,” he said. He expects to try again on an upcoming ballot, but in the meantime he and school board members need to figure out how to cut costs with minimal effect on academic progress.

“We’ll have to review implementing cuts in the near future,” said Lakewood School Board President Joe Bowman, Jr. “We’ll explore anything we can do.” He agreed there would be another levy on an upcoming ballot, although it’s too early to know its millage. “We’ll come up with some sort of solution,” said Bowman.

In Union Township, Rick Black became the first challenger in 24 years to defeat an incumbent. Black led the five-person race for two positions with 1,031 votes. Jesse Ours was reelected to a seventh term with 981 votes. Beacon editor Charles Prince was third with 949 votes, following by incumbent Jack Justice with 910 and former Hebron council member Richard Moore with 475.

“I put a lot of hard work in this,” Black told The Beacon Wednesday. “It feels good.”

“I’ve got to see what is going on before I come up with any new ideas,” he added. “There will be a spirit of cooperation with the existing trustees, township staff and the Villages of Hebron and Buckeye Lake.” Black follows in the family footsteps. His father, Dick Black, served as a Union Township Trustee for 16 years beginning in 1970.

“It will be a pleasure to get back in and work with the trustees,” Acord said. “I plan to work out some of the concerns voters expressed to me during my campaign.”

In Hebron, former council member Jim Friend led a sixperson race for four council seats with 351 votes. Pam DeVaul, who was recently appointed to council when Erin Finkes resigned to accept a Washington, D.C. promotion, was second with 329 votes, followed by incumbents Scott Walters with 320 and Annelle L. Porter with 298. Long-term incumbent Ray Guinsler came in fifth with 281 votes. Dale Burns was last with 206 votes. Several large hand-painted signs appeared over the weekend, claiming the village spends $1.6 million on salaries and encouraging voters to save money by not voting for Porter and Walters. Hebron voters renewed a five year two mill levy for fire protection by a 415- 239 margin. Kroger customers will now be able to buy spirituous liquor Monday through Saturday and from 10 a.m. to midnight on Sunday, after Precinct B voters approved two local options by wide margins.