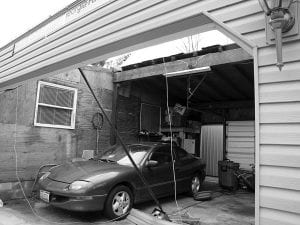 A tornado just before dawn on Monday morning took off most of John and Kimberly Darst’s roof on Lake Road in Walnut Township. Beacon photo by Scott Rawdon.

MILLERSPORT – It all happened so fast that Millersport resident John Darst didn’t know his roof was missing until a firefighter told him.

“I don’t know if it sounded like a train; it sounded like something loud,” he said. Monday morning a tornado touched down south of Millersport wreaking havoc on Darst and his wife Kimberly’s single story Lake Road home. The tornado also virtually destroyed the King Farm on Canal Road. Miraculously, there were no fatalities or injuries at either property, except for one head of cattle at the King Farm that may have suffered a leg injury.

Darst said he heard a “loud racket” around 6 a.m. and saw an orange glow through his bedroom window. A utility pole near his home was on fire and he called the fire department. He said the damage to his roof was away from his bedroom. A firefighter knocked on the door see how the Darsts were doing because their roof was missing.

Darst said he’d just come out of his bedroom and wasn’t aware of the extent of the damage. “I was like, ‘excuse me?’” he said. Large sections of the roof were gone, including over the garage, which nearly lost its entire roof. The garage door was torn off and deposited many yards away in a twisted heap and Darst’s car was damaged. Broken wood and shingles were strewn all over the backyard. 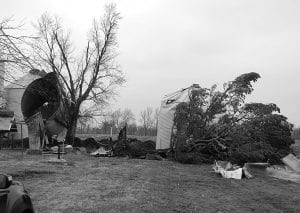 Damage was extensive to a barn and grain silos on the King Farm on Canal Road. Beacon photo by Scott Rawdon.

The scene was even more dramatic at the King Farm where two metal grain silos were torn from their foundations and dropped frighteningly close to the farmhouse, which also sustained damage. A ceramic silo was completely destroyed, as were several buildings. The tornado destroyed a newly renovated barn’s roof. “We’d just re-metaled the barn,” said local builder David Keller. “We just finished it New Year’s Day. Remember when it got warm?” It was too early for any of the storm victims to estimate damage costs.

National Weather Service Warning Coordinator Meteorologist Mary Jo Parker said February tornadoes aren’t as rare as some might think. “The conditions were kind of perfect,” she said. There was no tornado warning issued, but there was a severe thunderstorm warning issued about half an hour before the tornado struck, said Parker. “Even some thunderstorms can do that much damage,” she said.

According to the National Weather Service, this tornado was considered weak despite the damage it caused. It was rated an EF1, with a 105 miles per hour wind speed. It was about 75 yards wide and touched down for 2.4 miles. Still, corn stalks and debris were literally driven into the ground and a large piece of wood impaled the King Farm farmhouse. An EF1 tornado has wind speeds 86 to 110 miles per hour. The EF rating system extends to an EF5, a tornado with a wind speed greater than 200