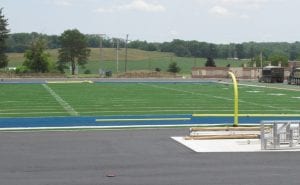 The synthetic turf was installed last week. Yardage markers and lines are being sown into the new plastic turf this week, The final layer of asphalt for the expanded eight-lane track was being installed on Wednesday.

The new visitor bleachers were also being installed Wednesday. Work on the new home bleachers starts next week.

Everything appears on track for the August 17 dedication except possibly the new building being constructed on the east end of the stadium for concessions, officials dressing room, school store etc. So far just the block walls are up on the nearly $1.3 million structure.

Lakewood is also seeking a new head football coach. Craig Conley resigned for personal reasons. Superintendent Mary Kay Andrews reported at the June 14 board meeting that a “significant number” of applicants are being considered.

Costs continue to increase beyond original estimates and contract bids. Board members, without discussion,  approved by a 3-1 vote with board member Steve Thorp voting “no,” to add seven percent contingencies to the contracts with The Motz Group and Dant Clayton. The contingencies potentially increase costs by $96,000. 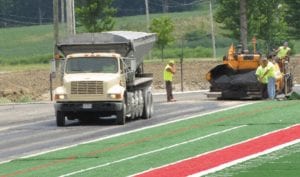 Dant Clayton is the bleacher contractor. For the district, The Motz Group is doing field site preparation, drainage and the new eight-lane track. Editor’s Note: We originally reported, in error, that the vote to approve the two additional contingencies was unanimous. The vote was 3-1 with board member Steve Thorp voting “no.” 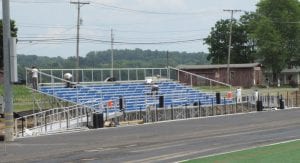