“Both Union Township and Licking Township are recognizing and demonstrating how proud we are of the dedication and remarkable accomplishment earned by these extraordinary student athletes and their coaches,” Trustee President Joe Hart told the Lady Lancers coaching staff and a strong representation of team members; Union Township Trustees similarly honored the Lady Lancers earlier that evening. 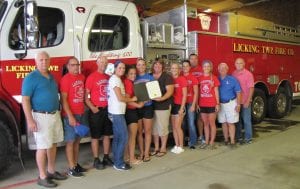 The Division II State Champions Lakewood Lady Lancers and their coaches felt right at home Monday night at the Licking Township Fire Company. Players and coaches get the “greatest ride on Earth” on top of the fire company’s equipment after each district, regional and state tournament championship. Beacon photo by Scott Rawdon.

As a sophomore, Lynch played on the first Lakewood Girls Softball Team to win the Licking County League District Title. “Which was quite an honor and accomplishment for that era,” she said.

The proclamation states, “The 2016 Lakewood girls softball team and their coaches have demonstrated the teamwork and drive to produce a successful, winning Division II State Softball Championship season, and;

“Whereas, these players showed commitment and dedication to their sport and each other, and; 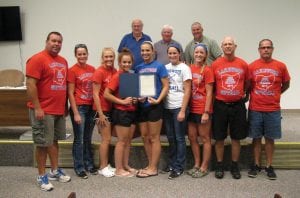 “Whereas, the Lancers played at the highest level throughout the season finishing 29-0, and;

“Whereas, head coach Criss Nadolson, assistant coaches Craig Sheridan, Devon Walker, and Marty Malone, and team scorekeeper/Mother Joyce Nadolson deserve credit for their hard work and dedication to produce not only a championship team, but young women who excel in the classroom and in the community, and;

“Whereas, it is important for the Licking Township Trustees to recognize this team’s incredible accomplishment.

Holman said he is an LHS alum who recently had his 50th class reunion. “Fifty years ago we didn’t have girls’ athletics. It was unheard of,” he said. Holman said female athletes could exercise their skills in physical education classes, but they couldn’t compete with other schools. Eventually, Holman raised an athletic daughter who participated in softball, basketball, and volleyball. “I must admit, I was reluctant to attend my first girls’ sporting event,” he said. “I thought it would be the most boring, mundane experience I could possible subject myself to. After five minutes, I suddenly realized how little I knew about girls’ athletics. It is one of the most exciting, thrilling experiences to go to any…they just play with a passion the guys don’t seem to have. I congratulate all of you!”

• JBA Architects Vice President Greg Cotterman told trustees his company completed an assessment of both the lower and upper structures of the Licking Township Fire Company; the trustees are considering creating a new fire station facility. According to the assessment, Cotterman said JBA suggests demolishing the lower fire station facility near Ohio 13 and replacing it with a new structure. Also according to the assessment, the upper fire station is in good shape, but better used for township equipment storage and a possible future community meeting room.

Beginning with the lower structure, Cotterman said the building, which is a post and beam structure with metal siding, is more than 30 years in age, and the township is currently using it for meetings, sleeping quarters, day room and three truck bays.

According to the assessment, the lower structure’s north face shows rust damage and possible structure deterioration west of the wood stairs and west of the entry door on the inside of the building, and its wood stairs do not meet commercial rise/ run requirements. Its west wall shows water damage, denting, and rust along with possible water deterioration of structure, and the south wall shows damage and sub-grade above finished floor and the exterior door does not seal properly. The east wall shows some minor rust damage and gutter is deformed over doors.

All main doors on the exterior of the building do not seal properly and require replacement. Overhead doors appear to be fair to good condition and would not need replacement, but would require adjustment and new weather seals.

The windows are in fair condition, but not airtight and would require replacement to bring the facility up to current energy standards.

The roof appears to have leaked in the past or is currently leaking based on stains inside the bay area and would require repair/replacement of eave flashings and re-painting/sealing.

There are roof drainage issues around the entire perimeter of the building. Gutters and downspouts are in poor condition or missing and there appears to be areas where water is not draining to the storm drain system. There is evidence in many locations that water has in the past or is currently flowing towards the building structure. Overall, all gutters and downspouts require replacement and should be tied into site storm water drainage system.

Interior walls, floors, and ceilings are in poor condition and have water damage.

Office area has a gas-fired, forced-air, residential style HVAC system. No outside air connection is apparent. This system appears to be at the end of its life cycle. Bay area has a gas forced-air cabinet unit heater that appears to function. There is no exhaust evacuation system or any type of exhaust fan in the bay.

Cotterman said JBA architects concluded the current station appears to be too small for the township for its current equipment inventory. The structure has signs of age and water damage on all elevations and further destructive investigation would be required to determine the full extent and seriousness of the issue. There appears to be structure deformation of the second floor joists and this would need to be addressed should the building be maintained. The building is over 30 years old and a post and beam structure lifespan is approximately 30 years unless specific steps are employed during the construction. The bay area is lacking in adequate ventilation. Turnout gear storage does not meet the standard practice for protection of the gear and should be rectified. The toilet room facilities and door openings do not meet the American with Disabilities Act and should be brought up to code.

The architects’ opinion is the cost to bring the structure up to code and safety standards would be prohibitive for a structure that is already too small for the township. The building should be demolished and the money that would have been required to update the structure used toward constructing a new cost effective, energy efficient building that will meet the township’s growing needs and requirements.

Cotterman said the news is better for the upper building, which is a post and beam building with metal siding was constructed in 1996, and is currently being used as an office, day room area, laundry, and four truck bays for the fire department. Overall the building is well maintained and in good condition.

Cotterman said architects concluded the current building appears to be functioning for the fire department office and day room, but it is too small for current full time needs of the department. Although the building is ideal for adding on new living quarters and expanding truck bay space, the access to State Route 13 and State Route 40 is problematic. Fire trucks cannot make the turns onto South and West streets without running over existing berms. This issue will only worsen as the need for larger rescue and ladder trucks grows.

The architects’ opinion is the apparatus and current functions be moved from this location to a new fire station located on the State Route 13 site. By consolidating the department in one location, operation costs would be reduced for the township and run times to the community would be lowered with better access to State Route 13. The building is in good condition and with minor updates it would be ideal use for the township for truck and equipment storage and a good location for a future township community/meeting room.

Cotterman said he met with Licking Township Fire Company Chief Mike Wilson and JBA Architects produced a preliminary design for a new fire station to be built at the lower Ohio 13 site, where the older fire station building is now. A new facility would have seven truck bays and a two-story section with living quarters for full-time personnel.

Cotterman said firefighters requested a fire pole in the new building. “This is up for negotiation,” he said. The new building would likely have a training room as well. “Right now, this is what we call ‘schematic design,’” Cotterman said. “This is the big picture, overview, big numbers. Then, we start honing it down. We’re trying to make it as elegant but as low budget as possible.”

Miller said the design process is in such an early stage it’s difficult to project a final cost for a new EMS facility. With that in mind, Miller said a new fire department facility could cost anywhere from $1.2 million to $1.8 million on the extreme high side.