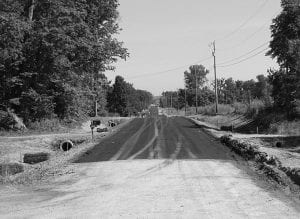 Looking north, this is the southern end of Phase II of the Cherry Lane reconstruction project. The reconstructed base has been coated with a petroleum sealer prior to placement of the new asphalt surface next week. Beacon photo by Charles Prince.

The meeting agenda ominously included an executive session for “termination of employee.” When the nearly four-hour meeting– that included nearly three hours spent in three separate executive or closed sessions – was over, Kemmerer, Morris and King still had a job, but each had lost thousands of dollars due to reduced benefits and hours.

Trustees returned from their third and final executive session of the night to unanimously require that the three pay 15 percent of the cost of their health insurance beginning next Monday (August 1). Horn estimated the savings at $690 per month. Currently, the three and all four elected officials – three trustees and a fiscal officer – pay nothing for their health insurance.

Though it wasn’t mentioned during the meeting, Trustee Terry Horn told The Beacon Tuesday night that the intent is to have everyone contributing 15 percent of the cost of their health insurance. Horn said trustees have been told that compensation can not be increased or decreased during an elected official’s term. There is widespread agreement that state law clearly prohibits increasing compensation during an elected official’s term, but less certainty about prohibiting decreases.

A special meeting was set for 6 p.m. on Thursday, July 28, to discuss reduction options with the township’s insurance provider. Horn said at a minimum the new trustee elected to replace retiring Trustee President Ralph Zollinger and the newly elected fiscal officer will be expected to pay 15 percent of the cost of their health insurance. Depending on the legal opinions on the reduction options, Horn and Trustee Sonny Dupler could continue to receive 100 percent paid health insurance until their term expires 12/31/13.

Trustees have been whacking away at expenses for several months as they attempt to close an estimated $50,000 or so deficit in the general fund for 2012. Until Tuesday night, most of the cuts had been relatively small in terms of dollars but significant in percentage terms. Zoning inspector Ralph Reeb’s salary was cut as was the zoning secretary and webmaster.

Kemmerer, Morris and King volunteered to cut their hours to 35 per week in a bid to keep one of them from losing their job. Trustees also unanimously accepted that offer which each one of them giving up five hours per week starting next week. Morris also agreed to give up his parks supervisor title and return to road worker so all of his salary and benefits can be paid out of the gasoline tax fund which is in much better shape than the general fund. That move saves about $27,000 a year out of the general fund. “It works from an accounting standpoint,” Horn explained.

The township secretary’s parttime hours were set at eight hours per week and she will have to give up her township cell phone.

Horn has been making the cost reduction proposals and that continued Tuesday night. Several of his proposals were not accepted. He suggested that the $35 per meeting compensation for members of both zoning boards be cut to $15. “That would go over with our boards like a ton of bricks,” Reeb told him. The maximum savings if both boards met monthly would be $2,880. Neither board is currently meeting monthly . Reeb reported that zoning permits are down 50 percent from last year’s reduced volume. So far, just 32 permits have been issued this year.

Horn noted that the township is spending $187 for three phone lines – one is for a fax machine – and Internet service. That is under contract until next year, but he plans to find out the cost to possibly break the contract. He believes one phone line can be dropped.

Dupler protested stating, “I don’t think we are destitute.” Horn also brought up again buying a setback thermostat to save on heating and cooling costs by reducing the comfort levels when no one is in the building. “I think it is a waste,” Dupler told him. When Horn asked why someone couldn’t change the thermostat when leaving the building for the day, Dupler suggested he do it. Horn said he wasn’t there every day but would make the change when he’s present. When he asked Zollinger’s opinion on the issue, he was told to “leave it alone.”

Kemmerer did have some good financial news for trustees. The cost of salt purchased on ODOT’s statewide contract dropped from $$ 67.02 per ton delivered to $62.56. He estimated that would save the township about $7,000 this year. Fiscal officer Lynn Kraner reported that investment income continues to drop. Two certificates of deposit totalling about $125,00 matured last week. The interest rate from the Vinton County Bank had been a bit over one percent for the last 12 months, but that has now dropped to .65 percent which is still the highest at the three area banks Kraner checked.

Dupler also reported on the status of the effort to select a single waste collector for residential waste in the unincorporated areas of the township. Residents of Millersport, Pleasantville and Thurston would not be affected.

Dupler prefers using the Union Township (Licking County) contract with Big O Refuse as the model for the township’s contract. He is still waiting for current prices from the Union Township fiscal officer. Dupler wants trustees to pick the provisions they like out of the contract. Trustees decided its time to hear what residents have to say about the proposal. They unanimously agreed to set aside time at the beginning of their next regular meeting – set for 7 p.m. on Tuesday, August 9 – for public input on the plan for a single residential waste hauler.

Kemmerer reported that Phase II of the Cherry Lane reconstruction should be finished soon. Phase I was completed last year, starting at the county line and moving south to Blacklick-Eastern Road. Phase II extends the reconstruction an additional .72 of a mile toward Ohio 204. The total cost is $386,000 with the township picking up 26 percent or $100,000. Tuesday, a subcontractor, Base Construction Technologies of Columbus, completely redid the poor road base. A special machine ground the existing road surface and bed down a foot deep, creating a uniform ground product that was then mixed with portland cement and water. That turned the grindings into a rock hard base that was sealed with a petroleum-based product. After sitting for five days, a tack coat will be applied to the reconstructed base and two 1.5 inch courses of asphalt will be applied to the new base.

Kemmerer said once the base is set, any excavations into the base will have to be made with a concrete saw. A backhoe will not be able to break it. He expects the project to be complete late next week if weather cooperates.

He asked trustees whether they should move ahead with Phase III which extends the reconstruction to Ohio 204. The estimated cost is $440,000 with the township’s share expected to be about $114,000. The next step is to spend about $300 to file for the next round of Ohio Public Works Commission grants. The township believes it can borrow its share interest free for 10 years. Trustees didn’t make a decision one way or the other.

Trustees opened the meeting with 1.25 hour executive session with Reeb and attorney Steve Davis “regarding pending legal action.” Though there was no discussion about the session nor any decisions made, presumably it was about the township’s involvement in the legal battle over the proposed C&DD landfill just west of Ohio 37.

The second executive session was listed on the agenda as “Reprimand of Fire Personnel.” Up to this point, Dupler and Horn had been amicable. Horn said trustees could not reprimand a Millersport Fire Department employee. That would have to be done by Millersport officials. Dupler said the “grievance” would be forwarded to Millersport Village Council. “What’s your grievance?” Horn asked.

Dupler refused to read the referral being sent to Millersport. “If it is publicized in any way, it will be Millersport, not Walnut Township,” he added.

Horn suggested that Dupler try to resolve the complaint man-to-man. He noted that Dupler has heard only one side of the story and hasn’t spoken to Millersport employee involved.

“You only have one side of the story,” Horn told him. “Find out the other side of the issue. If we can’t resolve issues man-to-man, we have a problem.”

He told Dupler he was “going off half cocked.” Dupler moved to forward the grievance to Millersport Council. “We don’t need this,’ Horn said. “It can be resolved.”

Zollinger sided with Dupler and the motion was approved 2-1.