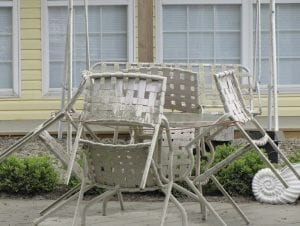 All three photos were taken in April 2016. From top left: the April 30 Portland cement release left a thick coating on everything in the nearby Rosebraugh Circle neighborhood. Top right: Emissions were often visible when Premium Gel was unloaded via the Super Sax system for mixing with Portland cement. Bottom right: Construction traffic often generated large clouds of fugitive dust that drifted onto nearby homes and vehicles. Beacon photos by Charles Prince.

The December 21 letter states, “Portland cement is described by its manufacturer, Cemex, in its Material Safety Data Sheet, as “…considered hazardous by the OSHA Hazard Communication Standard…” The listed hazard statements are:

• May cause an allergic skin reaction;

• May cause cancer (Inhalation, Dermal). 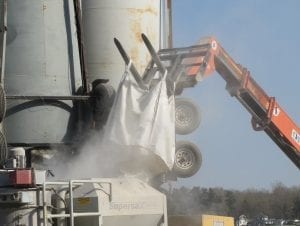 The letter continues, “We recognize the unique challenges this project places on ODNR and its contractors. Construction activities have also created some extraordinary threats to the health of our residents and nearby neighbors. It is very unusual for anyone to be living within a few feet of a major construction project, particularly one that is nearly continuously releasing pollutants (primarily diesel emissions and Portland cement) and particulates (dust and Portland cement) to the air.”

It notes that “our concerns are not speculative,” recounting the April 30, 2016, release of between 0.0 to 1.2 tons of Portland cement as estimated by Ohio EPA after a truck driver delivering cement reportedly fell asleep and overfilled a silo. “This hazardous dust settled on more than a dozen homes, vehicles and pets, causing damage to roofs, siding, decks, foliage and vehicles’ finish.” 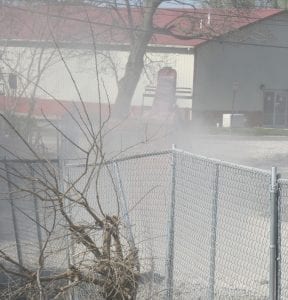 The trustees continued, “ While ODNR has taken extraordinary steps to protect residents from a possible failure of the Buckeye Lake dam, little has been done to protect them from the immediate threat of airborne exposure to Portland cement, fugitive dust and diesel fumes. The two bulk plants, leased from Diversified Storage Systems, appear to have very limited pollution controls. Portland cement emissions were routinely visible around the dust collector on the top of the silo when tanker trucks were refilling the silo. These emissions often drifted or were blown off the construction site and into the nearby residential areas. As the April 30 release demonstrates, these bulk plants were not equipped with automatic shut-offs to prevent overfilling or even alarms to alert an operator of an impending overfill.”

The letter outlines two steps to protect residents. “First, any Portland cement storage or mixing facility must incorporate Best Available Control Technology (BACT). While we have not found BACT requirements for concrete batch plants or cement bulk storage plants in Ohio’s air pollution control regulations, the Texas Commission on Environmental Quality upgraded its requirements for these plants effective December 21, 2012. These requirements include setting minimum control efficiency standards for filter systems; performance standards of no visible emissions exceeding 30 seconds in any six-minute period; lighting silo filter exhaust systems to determine compliance with the visible emission requirement during non-daylight operation; installing automatic shut-off or warning devices on silos; and use of a suction shroud or other pickup device at any drop point such as the Super Sax system for adding Premium Gel. We’re confident Ohio EPA’s Division of Air Pollution Control could provide valuable assistance in meeting our objectives.”

“Second, accept the control standards on the emission of fugitive dust outlined in Ohio Administrative Code Rule 3745-17- 08 ( B). While ( B) generally is not applicable in Fairfield or Licking counties, we believe the very close proximity of hundreds of residents and neighbors to this project and the dust generated by it warrants the (B) controls. 3745-17-08 (A) (2) also allows the Ohio EPA director to implement the (B) requirements if believed necessary. While contractors did operate two small water trucks occasionally during the seepage barrier construction, the application frequency was not sufficient to control fugitive dust.

Taking these two steps will not materially affect the project’s cost or schedule, but will provide the reasonable protection that our residents and neighbors deserve from the project’s harmful and hazardous effects.”

Copies were sent to Ohio EPA Director Craig Butler, State Senators Troy Balderson and Jay Hottinger and State Representatives Larry Householder and Tim Schaffer. To date, Schaffer is the only recipient to acknowledge the letter.