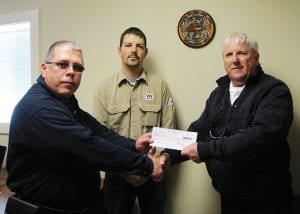 The new contract is a direct result of voters approving an additional 1.5 mill levy for fire/EMS services by an unofficial 691-585 voted on Nov. 5. The new fiveyear contract was approved even though a year remained on Granville’s current contract.

Black said township residents within Granville’s coverage area discovered one-third of the money they were paying for fire and EMS coverage was going to Hebron, not Granville. “They want their money to go to Granville,” he said.

“The problem was that the portion of Union Township which we serve generates approximately $120,000 annually. Hence, $40,000 was being retained by Union Township and being distributed to Hebron, who does not serve these residents,” said Granville Township Fire Chief Jeff Hussey. “Our position is that we believe fire and EMS tax revenues should go to the service provider of each respective service area. Many residents in our service area agreed with this philosophy, and wanted to see this issue corrected.”

Hussey said with the approval of the new fire levy, the Union and Granville trustees agreed that there was an opportunity for Granville to begin receiving all of the revenue from its service area, while still seeing Hebron receive a significant increase in revenue; Union Township also contracts with Hebron Fire Department to serve the township area south of the railroad tracks.

“Incidentally, we are also pleased that the new fire levy brings the taxation rate for fire and EMS up to the same rate that our own residents pay,” said Hussey. “For the first time in decades, Union Township residents will pay an equal, fair share for service compared to Granville Township residents.”

Hussey said the new contract is a “pass through” of revenue received in each service area. “Our expectation is that the Granville service area will generate $155,000 (including the new levy) and that revenue will be distributed to us,” he said. “The Hebron service area is expected to generate $675,000, so Hebron will receive that amount, which is a quarter million dollar increase for them. I would certainly consider that a win-win scenario for all agencies involved.”

Not everyone is ready to agree.

“We presented them with a contract for $420,000. At no point had we ever discussed if Hebron wanted all that money,” said Hebron Mayor Clifford Mason, who was clear that the village was willing to work with the township, whether the levy passed or not. Union Township and Hebron have yet to agree on a contract. Their existing contract runs out at the end of the year. “We’re not just looking for a contract; we’re looking for a partnership,” said Mason, adding he wants to work reasonably with the township and is not out to grab every cent he can for the village from the new levy.

Black said since the levy passed he anticipated Hebron could receive $ 670,000 to $675,000 per year based on levy revenue, although he wasn’t sure of the exact amount. Black has proposed that the township pay the Hebron and Granville Township fire departments based upon the revenue levies generate in their respective service areas, as opposed to a specific agreed upon amount between parties. He said both Granville Township and Hebron would receive EMS billing revenue from runs in their coverage areas.

Hebron officials and the trustees were discussing another contract for $420,000 ahead of the 1.5 mills levy approval, under the agreement the contract would be revisited if the levy were approved.

Mason said Hebron officials would have concerns with signing a contract with Union Township that doesn’t have a specific dollar amount assigned. “Are they guaranteeing $675,000 (annually) for five years? What if their levies fail,” said Mason, adding that two Union Township fire levies would be up for renewal during a fiveyear contract. He’s concerned if Union Township’s revenue changes during that time, the amount Hebron receives would change as well.

“We just have some questions,” said Mason. “I’m not certain what council’s going to do.” He said the Hebron Village Council only has one meeting remaining this year, but may opt to call a special meeting to discuss the fire contract if necessary.

Trustee-elect Charles Prince disagreed with Black’s proposal when it was first raised Nov. 14. “These are multi-jurisdictional levies similar to MRDD, joint vocational school and senior citizen levies,” he explained. “Revenue should be allocated on the basis of need, not where it is generated.”

The need is clearly much greater in the Hebron service area, Prince said, adding that through Nov. 19, Hebron has made 360 runs into the township this year, compared to just 52 by Granville. Projecting those runs for the full year shows Granville receives $1,355 per run based on the current contract which is 31 percent higher than Hebron’s $1,032 per run.

“I don’t understand why the decision had to be made so quickly,” Prince said. “Rick (Black) wanted the fire chiefs to meet to discuss possible boundary changes and scheduled the next meeting for Dec. 12. He also agreed that we didn’t have definitive numbers. Then in just 96 hours he decides the fire chiefs don’t need to meet nor do we need definitive numbers for a five-year contract.”

“It is irresponsible to spend 100 percent of the township’s fire levy revenue for five years – that’s $4.5 million – without discussing how we can use the additional taxes to improve service,” he added.

“Residents aren’t getting anything for the extra $393,000 they will be paying annually,” Prince said. “There are some 8-10 minute response times to Gale Road and the western portions of Refugee, Beaver Run, Blacks and Deeds roads that need to be addressed. It’s unbelievable that voters generously increased their taxes by 76 percent yet trustees didn’t spend a minute discussing how to improve service for them. The entire focus was on getting more money for Granville.”

“I thought I was joining the Board of Union Township Trustees, but now I’m not so sure who they are representing,” Prince concluded.