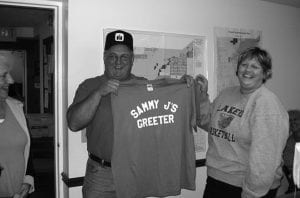 Retiring road supervisor Randy Kemmerer was honored by trustees, family and friends at a reception following the meeting. Here he shows off his new uniform beginning next Monday. Photo courtesy Terry Horn.

Road supervisor Randy Kemmerer told trustees that the township had $46,809 left in the county’s road and bridge account. “That needs to be spent this year,” he said. “Or we’ll lose it.”

He suggested spending $38,000 to motorpave Elder Road. It runs north and south east of Pleasantville. Only about a quarter of a mile of it is in Walnut Township. “It is the worst road in the township,” Kemmerer told trustees. Woolard Road is also in very poor condition, he acknowledged, but it’s too expensive to repave this year with an estimated cost of $86,000.

Trustee Sonny Dupler agreed with Kemmerer’s assessment. “You’ll plow half of it away this winter.”

Trustee Terry Horn said the focus should be on the highly traveled roads. Most of the dozen or so residents in the audience weren’t familiar with Elder Road.

“It could go back to gravel,” Kemmerer said. “It’s down to the dirt.”

In other business Tuesday night, zoning inspector Ralph Reeb announced that township worker Tim Morris is resigning from the zoning commission effective 12/31/11. He has served on the commission for 12 years.

“You have an alternate member that could move right in that spot,” Reeb told trustees. “Historically, you have taken the alternate and then advertised for a new alternate.” The zoning commission doesn’t plan to meet again until January. Trustees didn’t take any action on the future vacancy.

Horn reported briefly on his meeting with Southbank resident Robert Myers and Reeb. Myers filed a written complaint about Reeb at the last trustees’ meeting.

“I thought we heard from Mr. Myers and Mr. Myers heard from us,” Horn said. When asked if Myers’ claimed trellis is a fence as Reeb contends, Horn said that issue hasn’t been resolved. Reeb said he believes Myers still intends to challenge the revised zoning resolution in court.

Trustees also discussed a fee increase proposal from the Region- al Planning Commission. Political subdivisions are currently paying 20 cents per resident per year which is $909 for Walnut Township. The Commission, which has reduced its staff from five to three in 2009 and cut its budget from $295,000 in 2009 to $224,000 this year, wants to increase the fee to 25 cents next year. Walnut Township would pay $1,197 next year. Township representative Larry Neeley said the housing downturn has significantly reduced the Commissions’s fee income.

“They’ve done n outstanding job,” Horn said. Trustees were prepared to support the increase with a resolution, but it’s too early for that.

Trustees also unanimously approved salt supply contracts with the Villages of Buckeye Lake, Millersport and Pleasantville. The only change this year is to add a $.50 per ton loading fee to the township’s cost for salt under its ODOT contract. The new fee will help offset the cost of diesel fuel for the loader. The contract with the Village of Thurston to supply salt and plowing was renewed. At Horn’s suggestion, billing will now be monthly instead of annually and language about a maximum payment of $2,000 will be removed.

It’s down to a two- person race to replace Zollinger. Jimmy Barber withdrew as a candidate reducing the field to Doug Leith and Bill Yates.