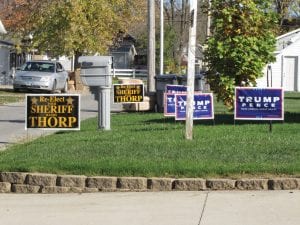 Support for Trump ran stronger in all three lake area counties than nationwide. The outspoken first-time political candidate garnered 60.37 percent of the vote in Fairfield County, 61.32 percent in Licking County and a surprising 67.58 percent in Perry County where Democrats often find more success.

Voter turnout was high in all three counties even for a presidential election. Fairfield County lead with a 72.06 percent turnout, closely followed by Licking County at 69.60 percent and Perry County at 69.45 percent.

The attraction was the bitter presidential race. The only other contested major race was for U.S. Senate, but incumbent Rob Portman turned what some originally thought would be a very tight race with former Governor Ted Strickland into an easy victory.

Lake area support for Portman was strong ranging from 66.41 percent in Fairfield County, to 66.61 percent in Licking County and 67.15 percent in Perry County. Portman was a familiar face around the lake in 2014 and 2015 as he first discussed algae concerns with local and state officials and then worked to ease the pain caused by the dam reconstruction.

Only three of the six county commissioners seeking a new term faced challengers. Two of the three, Tim Bubb in Licking County and Dave Levacy in Fairfield County were reelected by large margins – 69.75 percent for Bubb and 61.13 percent for Levacy. Perry County incumbent Ed Keister was upset by challenger Ben Carpenter who received nearly 60 percent of the vote.

The real race to replace retiring Licking County Prosecutor Ken Oswalt was waged in the Republican primary last May. Retiring State Representative Bill Hayes received 63.57 percent of the vote in his race with Democrat Chris Shook.