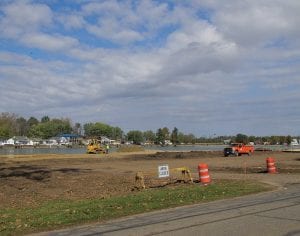 ODNR announced early this month that site preparation to establish construction staging areas at Liebs Island, Seller’s Point and the North Shore is underway. The announcement came via email to their Buckeye Lake contact list and later appeared as a Project Status Update on the Division of Engineering’s website. The Beacon was not included on the contact list.

The two-paragraph website notice didn’t provide any details about the establishment of “staging areas,” particularly not the loss of trees. About a dozen large trees that shaded picnickers and fishermen in a shaded grove west of the boat ramps at Liebs Island were removed last week. The only remaining trees on the boat ramp side of the now closed park are along the road. The tree cutters moved to the North Shore this week. About a dozen trees and large bushes were removed, making the rather barren park even more so. Even a couple of trees by the restrooms were removed. 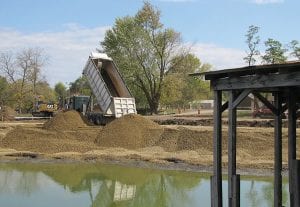 The historic Buckeye Lake Amusement Park fountain restored by the Buckeye Lake Area Civic Association and area marinas now sits like an endangered species in the middle of the new staging area. At this point, vehicle access is being maintained to the North Shore with construction activity taking over the largest parking lot.

The email version included a third paragraph about fencing in these staging areas. It stated, “For the safety of the public and contractor employees, temporary safety fencing will be installed in these areas. Final design of temporary fencing along the dam is not complete and we are working with all stakeholders to address concerns when possible. We will send another email when more information is available.”

Construction of the ramp for the new stability berm along West Bank is nearly complete at Liebs Island. A steady stream of both straight and trailer dump trucks dumped bank run Wednesday, while a small bulldozer extended the length and width of the berm by pushing the bank run into the lake. A floating plastic barrier curtain is in place about 75 feet off-shore. A portion of it is a filter fabric to reduce pressure on the curtain while still retaining silt. 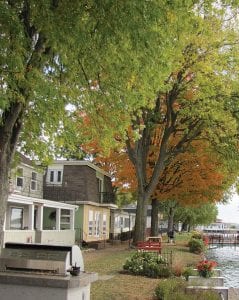 The first dock along West Bank was quickly removed by a large excavator Wednesday afternoon to accommodate the new stability berm. A nearby West Bank resident told The Beacon that she and most of her neighbors are letting ODNR remove their docks.

Shelly and Sands of Zanesville is constructing the three staging areas. An inquiry to Division of Engineering spokesperson John Wisse about Shelly and Sands was returned by Ian Nickey of Hicks Partners, LLC. Hicks has a $561,330 subcontract to provide Stakeholder Outreach. Nickey said the overall construction manager for the project has not been selected. A question about the Shelly and Sands contract, which was part of the original question to Wisse, was referred back to ODNR. 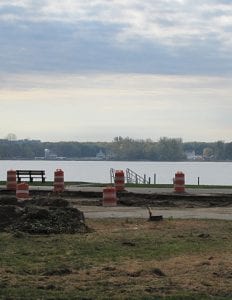 Nickey did confirm that the staging areas at Seller’s Point and the North Shore will also include the start of the stability berm in those areas. Space is also being created for a mobile office(s), he said.

Trees along the dam embankment are starting to change color. Peak color is just around the corner. This weekend might be the last time ever to enjoy the fall color along the dam. Nickey said he doesn’t believe a decision has been made on the fate of the trees on the embankment. Several top ODNR managers have stated publicly that the existing dam will not be a functional part of the replacement dam. That would seem to spare most trees since the 30-foot wide stability berm should provide plenty of space to construct the seepage barrier. However, the quick and extensive tree removals for the staging areas probably puts the dam trees in jeopardy. 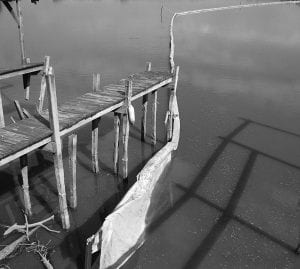 A plastic silt curtain has been installed off Liebs Island. Beacon photo by Charles Prince.

The Advisory Council meets late Monday afternoon. Questions about its agenda were not answered by Hicks nor Nickey.

A community meeting on A Better Dam Plan is set for 6 p.m. on Monday, Oct. 19, at Millersport Elementary School auditorium. Dr. Paul Rizzo will outline his cost and time saving plan. The agenda includes opportunities to prioritize issues, discuss options and organize for the future. Everyone is welcome!