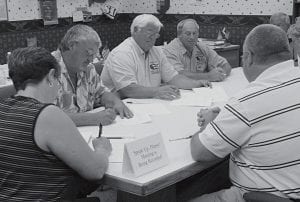 BALTIMORE- Liberty Township can’t halt operations at a business that is not compliant with zoning until the business’ appeal process is finished, said Zoning Administrator Tom Spring. Residents present at the July 2 Liberty Township Trustees meeting wondered why operations are continuing at the HydroMaster Seeding Company on Heimberger Road even though the township ruled that the business is not in a commercially zoned location.

Currently, Bob Richardson, HydroMaster owner, appealed a Board of Zoning Appeals ruling that HydroMaster was operating in a residential zone. Spring said July 9 that the township’s counsel advised him not to enforce the BZA’s decision until the appeal process runs its course. “Now it’s before the court,” he said.

Spring said the courts will also hear an appeal from Richard Estep, who wants to open a salvage yard at 145 Baltimore-Somerset Road, which is also within a residential district. Estep has argued that a salvage yard is a grandfathered use because the property has continuously operated as a junkyard since before local zoning was established. The BZA disagreed, and ruled in April that Bernard Franks, who opened the original junkyard on the property, never applied for a variance per a zoning ordinance from 1960, so the junkyard was never a legal use from the beginning.

Trustee Tim Linkhorn said both appeals are costing the township money it doesn’t have. He expects hearings to take place for both issues “within the next couple weeks,” as of July 3.

In other Liberty Township news:

• A resident commented July 2 that Wanda Drive is in extreme disrepair and wondered what the trustees plan to do about it. After the meeting, Linkhorn said he agreed that Wanda Drive needs repair and said the trustees will take a more “active role” in ensuring the township’s roads are maintained. July 10, the township issued a statement saying the Liberty Township Road Department will tar and chip several town ship roads between July 30 and August 31, including – Coakley, Eversole, Fisher, Forest Green, Havensport, and Lawrence roads, Wanda Drive, Oakwood Way, and Heimberger Lane. Also portions of the following roads will be tar and chipped – Bader Road, from Bish to Pleasantville roads; Bickel Church Road, between Stoudertown and Lawrence roads; Bish Road, from Carroll Northern to Coakley roads; Doty Road, north of Ohio 256 to north of Bickel Church Road; Leonard Road from Ohio 158 to one mile east; and Stemen Road between Snyder Church and Basil roads.

Trustee Ivan Ety said this is Spring’s first zoning inspector position. Trustee Nancy Montell said Spring is one of the best known administrators in the Ohio Township Association. Linkhorn said Spring’s dual position will be revisited at the end of the year. The township may split the position between two people. The former zoning inspector made $21,000 per year for a single position and worked less than 20 hours per week, Linkhorn said.

• The trustees approved paying $50,000 each for two new township trucks. Each of the trucks has about 26,000 miles and they were purchased from Prairie Township. The loan is at 4.7 percent interest. “The old (trucks) are nickel and diming us to death,” said Linkhorn.