Township tells property owner to clean up road side 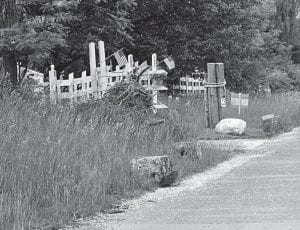 Trustees have given Robert Snedden Sr. seven days to remove stumps, stones and railroad ties from along the roadway at 8051 Somerset Road. Beacon photo by Charles Prince.

JACKSONTOWN – Robert Snedden Sr. is going to have to remove stones, stumps, railroad ties and other debris from along Somerset Road or Licking Township will do it for him.

Snedden and Licking Township Trustees have been at odds over the location of Somerset Road for years. But the action trustees unanimously took Monday night doesn’t address that dispute.

Snedden contends that over the years, Somerset Road has drifted over more of his property than the road right-of-way permits. Last August, he placed some railroad ties 8-12 inches onto the paved roadway along his property. After a neighbor complained to trustees about hitting one of the ties at night, trustees unanimously agreed to have township workers remove them from the roadway. When the ties were removed the next day, Snedden replaced them with several stumps, but removed them from the roadway after Trustee President Joe Hart asked him to do so. At some point, Snedden stopped mowing the bank and the stumps, stones and railroad ties are now mostly hidden in the tall grass. 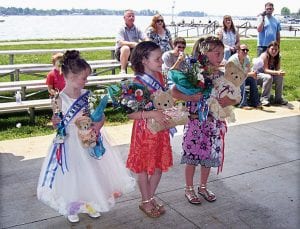 Hart asked Licking County assistant prosecutor Eric Fox how to address what trustees believe are now hidden hazards. Fox suggested using the authority granted to trustees in ORC 505.87 which allows “for the abatement, control, or removal of vegetation, garbage, refuse, and other debris from land in the township, if the board determines that the owner’s maintenance of that vegetation, garbage, refuse, or other debris constitutes a nuisance.”

Trustees made that determination Monday night and Snedden will have seven days after receiving notice of that action to remove the debris and control the vegetation. If he doesn’t do so, trustees will do it for him and ORC 505.87 allows the cost to be placed as a lien on his property.

“We made every attempt to get him to do the right thing,” Hart said. Trustee John Holman asked what happens if Snedden replaces the debris removed by the township. Hart said if that happens, they will take additional photographs and seek additional legal advice.

In other business Monday night, trustees unanimously approved resolutions seeking Ohio Public Works Commission grants for two road projects. The first one is to rehabilitate Hupp Road that runs east from Ohio 13 to Fairmont Road. The 1.12 mile road currently averages 16 feet in width. The estimated $384,840 project will widen it to 18 feet, repave it with a total of three inches of asphalt concrete, replace culverts and improve embankments and berms. The township’s share is $77,353.

“This would wipe out two years of our road budget if we did it on our own,” Trustee Dave Miller explained.

The second project is to rebuild Amherst Road in Harbor Hills. The 356 foot long road has a deteriorating concrete surface. The concrete would be removed and replaced by a new base and a total of three inches of asphalt concrete. The cost estimate is $42,130 with the township being responsible for $8,468. Trustees submitted both projects last year for OPWC funding, but narrowly missed the cut. They will likely wait to see if either project is funded, before making decisions to see what road projects the township will do on its own.

Trustees also unanimously accepted the recommendation of the Zoning Commission that alternate member Chris Neff be appointed to serve the remainder of Frank Davis’ term that runs through 2013. Trustees also decided to advertise for interested residents willing to serve as alternates on the Zoning Commission and the Board of Zoning Appeals. Zoning needs two alternates and the BZA needs one.

Fire Chief Mike Wilson reported that the fire company made 100 runs in May – 83 EMS, 16 Fire and 1 Dive Team mutual aid. He is still waiting for some more guidance from the county auditor’s office before recommending whether trustees should ask voters to renew a one mill fire levy or replace it. A replacement typically generates more revenue than a renewal by increasing the effective tax rate back to the original millage. Levies raise fixed amounts of money and as the township valuation increases through additional construction and escalating property values, the effective tax rate goes down. Last month Hart asked how a possible drop in valuation – due to foreclosures, property tax appeals and reduced property values – would affect a replacement levy versus a renewal. Wilson didn’t have an answer and neither did the county auditor’s office without some more research. Trustees will have to approve three separate resolution by late August to put the issue on the November ballot. The current levy, which will be collected through 2010, brings in about $115,000 a year.

Wilson said the company recently received a $2,279 state grant to upgrade software for filing EMS and fire reports with the state. The application requested $4,100 so he expects the township might have to come up with about $1,800. The company also got a $5,500 grant that will reimburse the township for some training and equipment expenditures.

Wilson reported that the two new cots for the medics have arrived. Last month, trustees approved spending $8,492 for the demo units. New cots are about $5,000 each. The existing units are seven and 11 years old respectively, and rated for 400 pounds. The new ones are rated for 700 pounds and convert to a chair on stairs.

Trustees’ next meeting is set for 7 p.m. on Monday, June 15 at the Licking Fire Company station on Jacksontown Road (Ohio 13).