Township prepared for the Gathering of the Juggalos 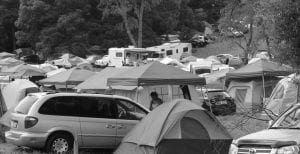 JACKSONTOWN – Licking Township officials are ready for the 17th Annual Gathering of the Juggalos, at Legend Valley this week. This is their third year here.

Psychopathic Records sponsors the annual festive that features performances by the label’s entire roster of acts as well as other musical groups and underground artists. Robert Bruce, the Insane Clown Posse (Joseph Bruce and Joseph Utsler), and their label founded the event in 2000. A “Juggalo” is a nickname for Insane Clown Posse fans. The Gathering is July 20 -23 but fans starting arriving over the weekend.

“We do expect a larger crowd this year,” said Legend Valley owner Steve Trickle, who anticipates roughly 6,000 people will attend the festival. One reason is this is the 17th annual gathering and the number 17 is important to the Juggalos. According to truejuggalofamily.com, the number appears regularly for the Insane Clown Posse. For example, when ICP released its first album, Carnival of Carnage, in 1992, it only sold 17 copies the day of its release; however, when ICP’s 1994 album The Ringmaster debuted in 1994, it sold 17,000 copies the week it opened.

“Because Sunday was the 17th (of July) they showed up early,” Trickle said. He said the sheriff’s office is providing longer coverage this year because fans arrived early, but not more deputies or equipment as compared to previous years.

Trickle said although the Juggalos have a reputation for rowdy concerts and festivals, he’s found the Juggalos to be more polite and gracious than fans of other genres, and he believes reports of problems at concerts are exaggerated. Trickle said for example, last year a young woman’s death did occur at the concert, but an existing medical condition was responsible, and he said there were no drugs involved with the incident.

Trickle said he’s aware Legend Valley’s neighbors aren’t fans of the ICP, but the only complaints he’s received from them are for fireworks. Trickle said the venue staff does its best to confiscate fireworks, but since a fireworks store is close by, it’s tough to confiscate them all.

As of Tuesday, Trickle predicted the 17th Gathering of the Juggalos would be “business as usual” compared to other Legend Valley concerts.

Wilson said the Licking Township Fire Company would be ready to deal with any emergencies, including possible heat stroke as the weekend’s weather is predicted to be insanely hot.

“They do have water stations out there,” Wilson said. “We prepare ourselves for all types of inclement weather.” He said there is plenty of mutual aid available and access to private medical transportation. There are contingency plans in place. As of Wednesday, Wilson said his department was called to the venue to inspect an RV’s propane tank, which had a faulty relief valve. Otherwise, there was “nothing major,” and department personnel were ensuring vendors are compliant with codes.

• Resident Jeff Baucher told trustees he wishes there were some way to keep motorized vehicles stay off the bike trail winding through Licking Township. “If we could get some kind of a deterrent,” he said. Baucher said he recently spotted a red pick-up truck driving quickly down the pedestrian and bicycle trail. “He was in a heck of a hurry,” he said. Baucher said he worried for local children’s safety of the safety of those using the trail properly.

Williams said the district has a very small staff and it’s difficult for the district to know if people are abusing the trails or if something like a strong wind has knocked trees onto a trail. He said he appreciates concerned citizens such as Baucher to inform the district when there’s a problem.

Williams said the Licking Township access to the bike trail may have had traffic barriers in the past but no longer. He said he’d look into replacing those barriers. Williams said creating proper barriers can be a challenge because the district must allow maintenance vehicles onto the trail when necessary.

In the meantime, Hart suggested Baucher and any other concerned citizens record the license plates of vehicles illegally entering the bike trail and report the incident to the Licking County Sheriff’s Office or the Ohio State Highway Patrol. Otherwise, Hart said enforcement is outside of the township’s jurisdiction.