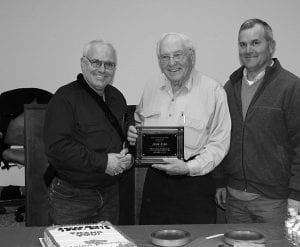 Union Township Trustee President Rick Black, left, presents Trustee Jesse Ours with a plaque commemorating his 28-years of service as a trustee at trustees’ Monday night meeting. Trustee John Slater, right, joined Black in the presentation. Ours’ family and friends enjoyed a cake after the presentation. Courtesy photo.

Basically, Hebron will receive all fire levy revenue generated within the portion of the township south of the Columbus & Ohio River railroad tracks, and Hebron keeps all EMS billing revenue from the same area.

Voters approved an additional 1.5 mill fire levy by a 699-591 vote Nov. 5, according to official election results, and trustees agreed to reopen contract negotiations with Hebron in the wake of the additional revenue. Earlier, trustees had offered Hebron $420,000 for 2014.

Trustees quickly approved a five-year contract with Granville Township on Nov. 18. Granville was under contract for $80,000 in 2014, but will now receive $150,000 to $175,000 a year after trustees agreed to give each department all the fire levy revenue from their respective service areas. Granville covers the portion of the township north of the railroad track.

“We’re not going to have to fuss about this for five years,” said Black, adding that lots of time was spent reaching an agreement with Hebron.

Black said he met with the Hebron Village Council’s Safety Committee and Mayor Clifford Mason earlier and worked out many of the details.

Some contract highlights include:

• The township authorizes Hebron to collect and retain all EMS billing revenue. There is an added clause stating the township shall continue to authorize EMS billing procedure so long as the village spends the revenue on “operational expenses” only, which includes, but is no limited to, the costs associated with equipment purchases, and maintenance and repairs, but “shall expressly exclude” any costs associated with facility maintenance, repair, and/ or bond payments applicable to the same.

Township Administrator Paula Greene said purchase of equipment and repair is considered an operational expense, so it was left in the contract.

• The contract will run for the five-year period so long as all three existing Union Township fire levies (or any renewal thereof) remain in effect through Dec. 31, 2018. Should any of the existing fire levies expire and not be concurrently renewed, the contract will terminate with the expiration of the failed levy and Union Township and Hebron may – this was changed from the word “shall;” Hebron Mayor Clifford Mason said he thought the word “shall” better protected both parties-enter negotiations for a new contract.

• The township and village agree to discuss equipment repairs exceeding $5,000.

• The Hebron Fire Department will provide the township sufficient records documenting June and December semi-annual training exercises and records of continuing education credits village fire personnel complete. The department will also provide a list of all certified full and part time staff members–names and level of certification-annually each December.

• The township will provide the village with four equal payment installments due on or before the firsts of April, July, October, and January.

• On or before Dec. 1, 2014, the village will provide the township a five-year fire and EMS master plan “so as to illustrate adequate means for the proper protection of township resident and businesses under this agreement.”

“The only item that I believe warrants further discussion is the area where they spell out our use of EMS billing revenue,” said Mason Tuesday. “Otherwise, it’s pretty consistent with what we offered.”

• ODOT District 5 District Coordinator Randy Comisford attended the meeting to discuss a resurfacing project for Beaver Run Road stretching from its Ohio 37 intersection two and a half miles east to Thornwood Drive. The federal government will cover 90 percent of the $163,102 price tag. Comisford said the resurfacing project should begin summer 2015. Trustees must choose an ODOT-approved design company early next year.

• Joe Garrett, aggregation specialist with Trebel LLC, told trustees it’s time for voters to consider an energy aggregation to find the best rate for power. “Townships can ask voters for authority to find better deals on electricity and natural gas,” he said.

Garrett said AEP will no longer be selling power directly in 2015. “It’s going to happen to the residents whether they like it or not,” he said.

Trebel would help the township place the issue on the ballot and actively seek its adoption at no cost to the township. If voters approve aggregation, Trebel would seek bids from electric suppliers. Garrett told trustees that their contracts are designed to protect users, rather than suppliers. Trebel seeks a fixed discount rather than a fixed rate so residents will continue to receive a discount if rates should decline. Their contract also eliminates any fees for an individual customer to “optout” of the aggregation contract. Garrett said he supports “freedom of choice” and if some residents don’t want to switch from AEP to another supplier for a discount that’s their right. Residents could “opt-out” at any time without a penalty.

“Placing it on the ballot doesn’t mean the trustees have committed to anything,” said Garrett. He said Granville Township went through the process. “If you’re going to do it, now is the time to do it. We’re bringing savings you don’t have to do anything to get.” Garrett said it’s very rare that people who participate decide to opt-out. “When folks participate, they won’t leave,” he said.

He added that placing the issue on the May or November ballot next year won’t cost the township anything since other issues will be on the ballot.

• Trustees will hold their yearend meeting at 9 a.m. on Tuesday, Dec. 31. They have not yet set a date for their 2014 organizational meeting.