Too Good to be True! 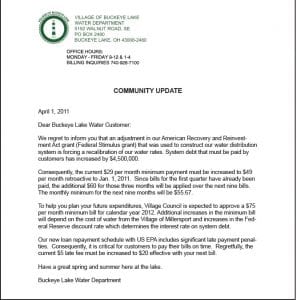 CHICAGO – “If it sounds too good to be true, it usually is.”

Buckeye Lake Village officials now wish they had heeded that longtime Better Business Bureau catchphase. They recently learned that a simple “mistake” in a May 2009 federal stimulus award will have a devastating impact on village residents.

Village officials were ecstatic in May 2009 when a $5 million stimulus grant was awarded for the village’s $6.5 million public water distribution system. “It’s going to have a huge impact on (rates),” Mayor Frank Foster told council members at the time. Rather than borrowing $6.5 million, water customers would only have to pay back $1.5 million via their water rates. 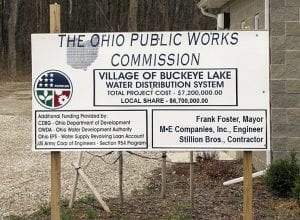 “That should have raised some questions,” commented a neighboring mayor who didn’t want to be named. “It was one of the few stimulus grants in the lake area and it was so big. It prompted us to redouble our efforts for our own projects but it was a one-off.”

The good fortune prompted Buckeye Lake officials to spend nearly $100,000 to make the new water tank look like a lighthouse and reduced monthly minimum water bills from an expected $50+ to just $29.

Reality arrived early this week in a certified letter from US EPA Inspector General Arthur Y. Sume Jr. “Pursuant to a 40 C.F.R. Part 99 audit,” the letter began, “this office has determined that a computational breach has occurred.” In plain English that means there was a mathematical mistake in the calculation of the amount. Specifically, a decimal point was misplaced in Buckeye Lake’s American Recovery and Reinvestment Act of 2009 grant. That error turned an intended $500,000 grant into a $5 million one. 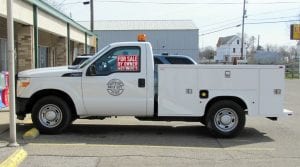 Buckeye Lake’s new water department truck is for sale. Stop in the village office or call 928-7100 for details. Photo illustration by Kendra Edinger

Sume’s letter then gave Buckeye Lake officials 180 days to repay the $4.5 million overpayment. A spokesperson for the Inspector General told The Beacon, “While US EPA Administrator Jackson and Inspector Sume regret the error and its impact on Buckeye Lake residents, this is no different than receiving an unearned refund from the IRS or an errant deposit into your bank account. It was not intended for the village and it must be repaid.”

The 180-day deadline to repay it panicked Buckeye Lake officials. They turned to Congressman Bob Gibbs for help.

“Congressman Gibbs quickly took up our cause,” Mayor Rick Baker said. Gibbs pointed out to Jackson that Region 5 officials knew that Buckeye Lake was getting a $5 million grant, adding that the acting regional administrator attended the June 2009 groundbreaking.

Gibbs also turned up some information that the “computational breach” may not have been an innocent mistake. A GS6 grants project assistant (GPA) in Chicago processed Buckeye Lake’s paperwork. According to Gibbs, US EPA internal auditors have found some evidence that the GPA involved, Ira K. Zellner, may have intentionally moved the decimal point.

Zellner, who retired last week, has a link to Buckeye Lake. Though he grew up in Chicago, he spent summers as a young boy in the 1950’s helping his Uncle Frank Zellner run his concession at the Buckeye Lake Amusement Park. Donna Braig’s, My Buckeye Lake Story, mentions a Frank Zellner who ran the Break the Dish game along the waterfront. Park visitors threw baseballs at dishes and Braig remembers young boys retrieving the baseballs.

The Beacon couldn’t find anyone who specifically remembers Ira Zellner, though Braig did recall a Break the Dish ball boy having a boyish crush on her daughter, J-me. If he did, Zellner didn’t make an impression on J-me who asked, “Ira who?”

A source in Gibbs’s office said US EPA officials were pushing back hard, claiming that Zellner might have received some inducement to move the decimal point. J-me Braig told The Beacon she hasn’t been in Chicago in years.

The possibility that there was some kind of favor to Zellner apparently spooked Gibbs, a Buckeye Lake official told The Beacon. “I don’t blame him. He didn’t want to be embarrassed if evidence of a come-on turned up.”

Gibbs then focused on repayment terms. Buckeye Lake had expected to borrow some $6 million before the stimulus grant fell out of the sky. Water rates were also expected to be about double what they ended up.

That $6 million was made up of a package of loans with interest rates ranging from zero to 3.5 percent and averaging 2.6 percent. Gibbs pushed hard for a lower interest rate to minimize the financial impact on village residents. He asked for the federal discount rate which is government’s lowest interest rate. It is the rate that banks pay when they borrow money from a Federal Reserve bank. Federal Reserve governors are required to set it every 14 days, but it’s been stuck at 0.75 percent for more than a year now. Buckeye Lake’s rate won’t potentially change every 14 days; Gibbs successfully got it set at its average every three months. But if inflation builds, expect the discount rate to increase, perhaps dramatically.

The impact on customers will be immediate and severe. It’s outlined in a letter being mailed April 1 to water customers. A photo of that letter appears nearby.

When US EPA accepted the discount rate for the interest rate, Controller Robin W. Kash demanded significant late payment penalties. “We’ve got to get our money on time, so we can pay US EPA on time,” Buckeye Lake Fiscal

Officer Vince Popo explained. “Council wanted to make sure customers pay attention to their water bills so they increased the late fee from $5 to $20 effective immediately.”

Village officials are trying to cut expenses across the board to reduce the financial pain for residents. The brand-new water department truck is up for sale. “We don’t need those fancy equipment compartments nor a new truck,” Baker said. “Toby (water tech Toby Miller) can just put a tool box in the back of a used pickup. Hopefully, the police department will impound a pickup whose owner can’t afford the fines and fees.”

Council members are expected to cut their pay $5 per month for a total of $60 a year. “We’re feeling your pain,” Council member Jeryne Peterson said. “Plus we all have water bills too.” Baker is planning to cut his salary by $20 a month. He’s also planning to talk with M•E Companies about their $1 million plus in charges for the water system. “Maybe they can share the pain a little bit,” he said.

“I’m a little disappointed,” Council President Charlene Hayden said. “But it doesn’t tarnish all the good work council has done over the last several years.”