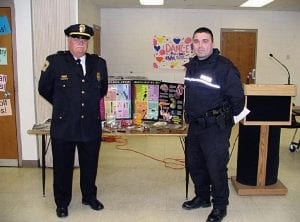 According to a press release from the sheriff’s office, for the first time multi agencies will work together to address drug and alcohol problems in Fairfield County. Agencies including police, schools, and social agencies will work hand-in-hand to reduce the availability of illegal drugs through education and aggressive enforcement action.

The SCALE program includes education of students, teachers, and parents about the signs and recognition of drug usage and drug paraphernalia. The Fairfield-Hocking Major Crimes Unit will target any drug dealers attempting to bring drugs in or around the schools. The Baltimore Police Department recently began a new DARE program within the Liberty Union-Thurston School District.

Phalen said the program was developed based upon results of a bi-annual Fairfield County ADAMH Board youth survey, which includes drug use statistics among Fairfield County youths. Phalen said members of law enforcement read the survey and asked, “Is there something we can do?” He said there is evidence of alcohol, marijuana, and prescription drug use; youths are stealing prescription drugs from parents or guardians. Phalen said there is also an increase in heroin use among older Fairfield Countians. Heroin is available, inexpensive, and extremely addictive. To illustrate his point, Phalen said when he first took office in 2001, there were generally eight to 10 females in the county jail any given time. Now there are 35 to 40 women in the county jail at any given time and they are usually heroin addicts.

In a related issue, the school district, the Baltimore Police Department, and the Village of Baltimore are working together to provide full-time resource officer Jason Hargett to the Liberty Union district. Superintendent Paul Mathews said the police department applied for an $11,000 DARE grant, the district is providing $10,500, and the village is providing $24,700 toward hiring the officer, who will serve on the village police department when school is out of session.

“We’re really looking forward to it,” said Mathews. In addition to providing security, Mathews said Hargett will also provide a positive role model for the students, who will learn that officers are good people trying to do the right thing. Mathews said there isn’t any singular statistic or incident prompting hiring the officer. In fact, Liberty Union was in negotiations to hire the officer before becoming the pilot district for the SCALE program. Mathews said when statistics show one in three seniors use alcohol, one in seven smoke marijuana, and one in 15 have abused prescription drugs, “Whatever those figures are, we’d like to reduce them.”