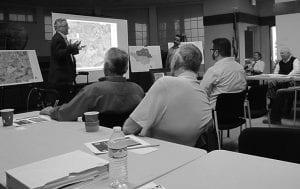 More than four inches of rain were recorded March 15 in about an hour at the Hebron Water Treatment Plant. A National Weather Service meteorologist termed the deluge, which included hail, a “backbuilding” thunderstorm that kept accumulating behind itself.

Depending on the duration of the storm with estimates ranging from just under an hour to more than an hour, it ranged from 200 year rain event to over a 1,000 year event.

Two years later, four straight months – May through August 2014 – with at least seven inches of rain made flooding nearly routine in some areas of the village. Complaints from residents about frequent flooding led council members to approve $20,000 for the study with then Mayor Clifford Mason organizing a September 2014 panel discussion with county and local officials. A Muskingum Water Conservancy District grant paid half the cost.

Last Tuesday, Mayor Mike Mc- Farland made a similar observation. “The bottom line is we live at the bottom of a hill.”

Coghlan said a series of “petition ditches put in decades ago” are supposed to channel water through the village. Some were cut before maintenance was a requirement and all have been affected by silt and vegetation.

The Greenbriar mobile home community and some areas along North and Ninth streets flood most frequently. “There is little that can be done for the Greenbriar community due to the back water from the South Fork,” Coghlan explained. “We’re talking about some big dollars. It’s a big problem,” he added.

Coghlan said flooding has been going on for a long time. He noted that the typical design standard for a culvert is to handle a 25 year flood. “Three culverts in town definitely need to be addressed,” Coghlan said. Two are under ODOT roads and one may be on private property – the old railroad bed between the former Hebron Village Hall and former Bowman Chevrolet dealership.

Coghlan said the most surprising discovery was that widening and clearing the channels in town won’t solve flooding in Hebron.

1. Removing 11 culverts and replacing them with larger box culverts. Hartman estimated it could reduce flooding along ditches in Hebron by 2 – 2.5 feet for a 2012 flood. It is estimated as the most expensive option at $5.1 million.

2. Constructing a bypass channel to reroute some upstream water away from the village. It might be the least expensive option at $2.4 million. Hartman estimated it would reduce water levels from a 2012 flood by a maximum of 1.5 feet along most streams in Hebron.

• Construct a six foot deep, 10-acre detention basin to hold stormwater before it reaches most homes. It is called “potentially the best solution.” Hartman’s estimate of its impact would be a maximum reduction of one foot from a 2012 flood. Its estimated cost is $3.9 million.

“Whatever we do is going to be costly,” McFarland said. “There is no way around it.”