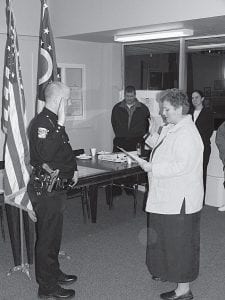 THORNVILLE – Thornville’s new full-time police chief has a familiar face. The village hired Nick Garver, who served as a full-time patrol officerunder former Police Chief Duane Moore from 2002 to 2006, when Garver accepted a position with the New Lexington Police Department.

Mayor Beth Patrick said Garver was the logical choice. “He’s done the job before. He knows the village and knows how to do the paperwork. He’s got a proven track record,” she said. Garver was among 12 candidates for the position.

Patrick said Garver will earn $27,040 per year and should start almost immediately.

“I’m glad to be back,” said Garver during a swearing in ceremony Tuesday night. When he takes over as chief, Garver will have fiveauxiliary officerson the Thornville police force. He’s hoping to increase that number to 10 to 12 auxiliaries and should begin presenting auxiliary candidates to the Thornville Village Council for its members’ approval soon. Garver plans to bring some formality to the department by having auxiliaries sign 16 hour per week contracts and attend monthly training sessions.

Garver said Wednesday that he plans to attend council meetings and regularly update council members and the media about the department. He said there will definitely be more road coverage and nightly business checks (for locked doors, etc.). Garver’s goal is to have a proactive, community friendly department. Eventually, he’d like the department to have a web site.

When New Lexington hired Garver, the future of Thornville’s police department was very much in question and the village government was scrambling for ways to ensure law enforcement in the village while solving its financial woes.

Patrick said previously that the residents wanted a full-time police chief and there are no plans to add more paid staff to the department in addition to Garver. She said auxiliaries are paid about $200 per year if they work at least 20 hours per month.