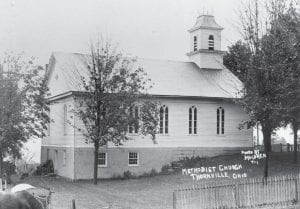 THORNVILLE – Thornville United Methodist Church is celebrating 200 years of Christian outreach and service from May to October. The church has been located at 30 East Columbus Street (Ohio 204) for the entire time. The Rev. Debra S. Ketcham is pastor of the 140-member church.

Circuit rider Jessie Stoneman and local leaders helped organize the church in 1807. At that time, Thorn Township and Thornville were part of Fairfield County. Perry County was formed in 1817.

German was the prevailing local language in the schools, churches and much of society in this area. However, Thornville UMC was an English-speaking congregation.

The new church met in residences until a log structure was built in 1814 on a lot owned by Jacob Kemper. Church trustees on April 20, 1820 bought the structure and lot for $25. The log structure was used until members built a 1,500 sq. ft. frame structure there in 1844. A woodburning stove in the middle of the sanctuary heated the building. Candles provided the light. In 1845, members bought the lot next door for $100 at a sheriff’s sale.

Special bicentennial events started in May and continue through October. Upcoming events are:

+ In July, Re. Brent Watson, assistance district superintendent of the Ohio Methodist Foothill District, will be a guest speaker.

+ A community hog roast will be held in August.

+ In September, Rev. James Wilson of the Troy First UMC will be a guest speaker. He grew up in the Thornville UMC and is the son of member Jim Wilson.

+ Bishop Bruce Ough, Bishop of the West Ohio Conference of the United Methodist Church is the guest speaker on October 7. A special dinner will be held after church in honor of his visit.

Potluck dinners will be served after church services on Sundays with guest speakers. Buckeye Lake area residents are invited to attend the bicentennial celebrations and worship services at 10 a.m. on Sundays.