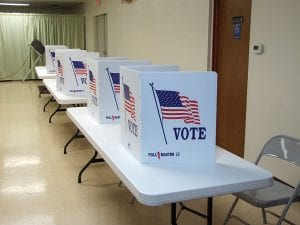 N EW LEX I NGTON – Voters selected a new Thornville mayor, although unoff icial results revealed a fairly close vote. The race for Thor n Township Trustee couldn’t have been much closer and won’t be decided until provisional votes are counted and the results certified.

Renner said he would wait for congratulations until the provisional ballots are counted, but assuming he wins the official vote as well he thanked village residents for voting for him and providing him the opportunity to serve the community “ in various ways over the years,” he said. Renner also thanked his wife, Mary and their daughters for their support and friend, Scott Bender for convincing him to run.

“For the next few months, I’d like to get to know more residents,” said Renner. “The election was pretty close, so I want to make sure I understand all questions and concerns from all residents.” He said he’ll prepare for his administration in the days leading up to Jan. 1. “We need to fill an empty council seat and rebuild the zoning and planning commission, too,” said Renner. “I have some questions about the impact to the village budget that will result from state level budget changes. That’ll likely be our key issue for the first 100 days.”

Mary Renner ran unopposed for one of two seats that were open on council, receiving 209 votes. The mayor will appoint someone to fill the remaining position.

“It is what it is,” said the one- ter m incu mbent, who said he believed there are 11 provisional votes to tally. “I’m disappointed,” he said, adding that he expected a “rough fight.

Incumbent Thorn Township Fiscal Officer Billie Dearlove won a second term, defeating challenger Jason Emmert 717 votes to 578. Dearlove was appointed fiscal officer in 2007, but has since won two elections, including the Nov. 8 vote. “I was pretty excited,” she said. Dearlove said the township will face cuts in state funding during this term. “But, Thorn Township is fiscally fit,” she said. Her goal is to make sure no one spends township money unnecessarily, whether the township is “fiscally fit” or not.

Elsewhere in the Perry County: