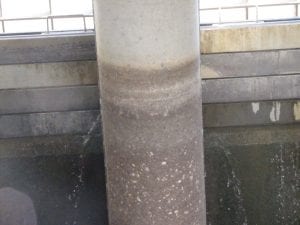 BUCKEYE LAKE – The final eight stop logs are in now in place (see photo top right). Four stop logs are installed in each of the six chutes at the AMIL spillway in Buckeye Lake Village.

Last week, water was flowing freely through the two northernmost chutes as well as the underdrains at both spillways as ODNR drew down the lake level. As of Wednesday, March 7, ODNR reported the lake level was one foot below the interim summer pool. With all the stop logs in place and both drains closed, the lake level will now start to climb back up.

Work that began last week at Crane Lake slowed this week. The berm being built on the inside of Crane Lake appears to be about 50 percent finished. The three turnaround areas on the berm between the AMIL spillway and the North Shore have been removed, with the material being used to build the Crane Lake berm.

A large crane is now assembled at the North Shore, presumably to be used to install the 42 foot deep steel sheetwall on the inside of the barrier between Buckeye Lake and Crane Lake. 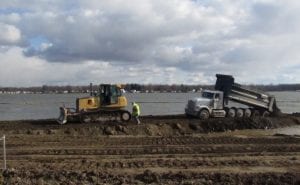 Our second or third hand report that a causeway would be built around the AMIL spillway is accurate. Berm material being removed from the Lieb’s Island staging area and possibly another turnaround is being dumped into the lake to create the causeway. The wet, reclaimed bank run makes construction of the causeway difficult.

A bulldozer had to pull out a stuck dump truck on Wednesday (see middle two photos).

So far, it has been a rain-free week, giving workers some relief from battling mud and stuck equipment. With the berm now drying out, construction traffic (see bottom photo) is creating considerable dust that is settling over nearby homes. So far, the project’s water truck has been missing in action.

It’s now been nearly seven weeks since we asked ODNR on January 22 to update the number of lineal feet of buttress wall completed. Since construction now requires three separate passes to complete its 10 foot width, we have asked for completed lineal feet of full width, one and two passes and one pass. 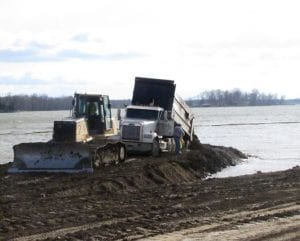 A promised update via a Construction

Update last week didn’t materialize. The two trenchers in operation must complete a total of 64,944 lineal feet. ODNR’s first and only update, provided December 11, worked out to be a total of 11,321 lineal feet (one pass equivalent) or 17.4 percent complete. ODNR’s Phase II contract with ASI listed January 10, 2018, as the date the buttress wall was to be completed. 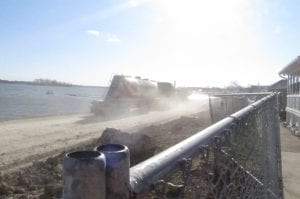