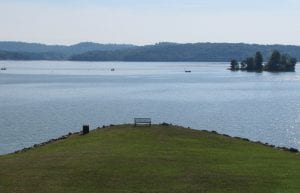 SENECAVILLE – Some Buckeye Lake boaters have been looking to the east…to Seneca Lake.

Picturesque and serene, Seneca Lake, which is approximately an hour east of Buckeye Lake near the City of Cambridge at the border of Guernsey and Noble counties, was likely little known to most Buckeye Lake boaters until the State of Ohio began reducing water levels to replace the Buckeye Lake dam.

“We have a lot of Buckeye Lake people,” she said. Ellis said Buckeye Lake boaters rented 50 slips from Seneca Marina and the marina has been forced to turn away some potential customers. “We ran out of docks,” Ellis said. “I don’t think we expected the volume.”

Ellis said some boaters looked to Salt Fork Lake and Dillon Reservoir when they couldn’t find a slip at Seneca Lake. “We had so many calls,” she said. Ellis believes transplanted boaters from Buckeye Lake are quite happy with Seneca Lake and may decide to keep their boats there even after Buckeye Lake returns to full pool, or at least near full pool, next summer. But, others are not so sure. 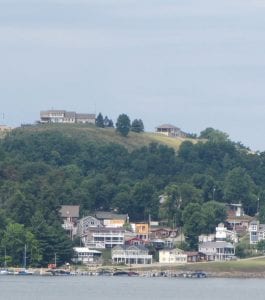 “Bar none, the people I talk to cannot wait to get back to Buckeye Lake,” said Buckeye Lake Marina owner Dave Levacy, who opened a satellite sales facility at Seneca Lake when ODNR announced Buckeye Lake would remain at low pool last year. Levacy said the announcement forced him, as a business owner, to change his business model to maintain operation. “We have good employees,” he said, and he wants his marina to retain them. Levacy said he found a local person to manage the Seneca Lake facility, which is doing well and will remain in business indefinitely.

However, Levacy said his company has transported boats not only to Seneca Lake, but Indian Lake, Deer Creek and several other Ohio lakes. While each lake has its attributes, he said Buckeye Lake boaters unanimously agree they would return to Buckeye Lake when the water level rises. 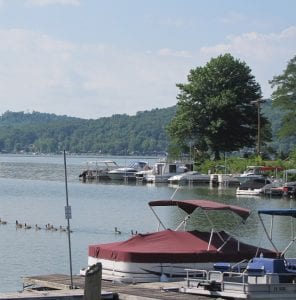 “I haven’t heard any exception to that,” Levacy said. “They all say, ‘Hold that dock for me.’ It’s a unified message.”

Seneca Lake is certainly beautiful, he said, but people say there’s nothing to do there. Seneca Lake has the Seneca Marina and the popular Dockside Restaurant, but being under the Muskingum Watershed Conservancy District’s control, it has very little of the nightlife and party atmosphere people enjoy and associate with Buckeye Lake. Levacy said Seneca Lake is more for hardcore anglers and those wanting to enjoy a relaxing day on the water.

Barbara Bennett, Muskingum Watershed Conservancy District director of administrative services, wouldn’t have it any other way. “We don’t have bars around the lake,” she said; however, the lack of a party scene has not affected the lake’s popularity. “Last year was record breaking attendance,” Bennett said. She said 30 more slips were added this year, which filled immediately. “We’re on track for another record breaking year,” Bennett said.

According to the watershed’s 2015 annual report, attendance at Seneca Lake was reported at 902,907 for 2015 which was a 3.25 percent increase compared to 2014. Seneca Lake is the conservancy district’s largest lake. Its park’s amenities include hiking trails, a swimming beach with concession stand, inflatable water toys, picnic shelters, and a nature center with special events and daily activities.

Seneca Lake boasts 3,550 acres of water surface and 4,060 acres of land. It has a 399 horsepower limit and two public boat-launch ramps. Bennett said the conservancy is investing roughly $20 million during the next several years in Seneca Lake’s camping facilities and overall infrastructure. The conservancy district enjoyed significant income from area oil and gas operations; Bennett said the district is investing some of that income in its parks and recreation. “We feel pretty good about Seneca,” she said, adding the lake attracts visitors not only from Buckeye Lake and other local areas, but “it’s getting a good draw” from Columbus, as well. 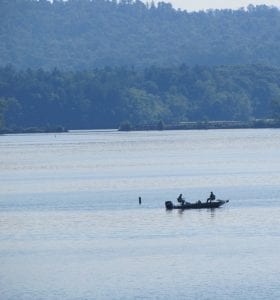 Bride agreed with Bennett that the conservancy district in no manner wishes to see Seneca become a party lake. In fact, although the Dockside Restaurant holds a liquor permit and offers live entertainment, it can only do so because it was grandfathered into the conservancy; the district will not allow new similar establishments to be created at Seneca. The Dockside is in the enviable position of being Seneca Lake’s only waterfront establishment. 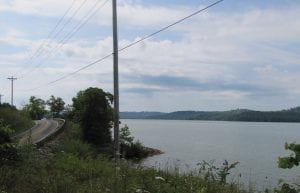 “It was the most massive rush of workload I’ve ever seen,” said Ott, who has serviced boats for 30 years. “We’re planning on doubling our crew next year,” he said.

Ott said the conservancy district invested a couple million dollars into the Seneca Marina, but had problems with boat service. “A major complaint on Seneca was there was nowhere to get service,” he said, so the district asked him to lease the building. “We’re still on a growth trend,” Ott said. Ott, who is familiar with Buckeye Lake and does business there, said he appreciates the business he does receive from displaced Buckeye Lake boaters, but he sincerely hopes Buckeye Lake boaters return home when the water level finally rises for Buckeye Lake’s businesses’ sake.