Wetlands created, destroyed around the lake 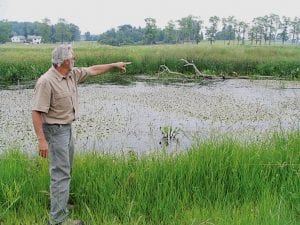 Dawes Arboretum Natural Resource Manager Tim Mason points out one of the many fascinating features of the Dutch Fork Wetlands, a new wetlands project, which mitigates wetlands lost by the expansion of SR 161 between Granville and New Albany.

JACKSONTOWN- A year ago, a huge field near Dawes Arboretum was dry as a bone. Today, it’s host to four distinct wetland marshes and is quickly filling with cattails and hundreds of animal species.

“This is the most exciting project I’ve ever worked on,” said Tim Mason, Dawes’ natural resources manager, who’s enjoyed a long career in environmental protection. “This doesn’t look like a one year old wetland.” The 70-acre wetland, called the Dutch Fork Wetlands, is being created in conjunction with the Ohio Department of Transportation to mitigate the wetlands destroyed by the multi-lane expansion of SR 161 between Granville and Columbus. Since wetlands are protected by the federal government, any wetlands destroyed by construction projects must be mitigated, or re-created elsewhere. Mason said the Dawes project actually creates more wetland area than is destroyed by the 161 expansion, and the Dawes wetlands are much higher quality than those being destroyed. 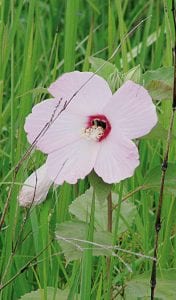 The former big field on White Chapel Road, west of SR 13, was farmed for many years. Ironically, said Mason, the field was a wetland prior to being farmed. Returning it to its original state was a matter of removing drainage tiles and creating a few mounds to hold water in pools as it flows between White Chapel Road and the adjoining Dutch Fork Creek. “It wants to be wet,” said Mason. Wetland fauna developed quickly, with the help of thousands of transplants, and word spread quickly amongst the animal kingdom; the Dutch Fork Wetland is already home to black ducks, dragonflies, countless frogs, and a growing list of species that rely on wetlands for survival. Mason hopes the Dutch Fork project will look like a 50 year wetland within fiveyears. Many of the “wetlands” destroyed for the SR 161 project had damp soil, which qualifies them as “wetlands,” but were home to few of the plant and animal species that are considered necessary for a thriving and healthy wetland environment. The Dutch Fork Wetland should be open to the public in September, said Mason. 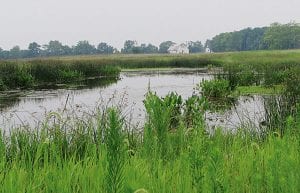 According to the Environmental Protection Agency, wetlands were once regarded as wastelands and nearly 90 percent of Ohio’s wetlands were destroyed–mainly drained for agriculture–before becoming protected. Nationally, nearly 60,000 acres of wetlands are still destroyed annually. Wetlands are now recognized as important features in the landscape that provide numerous beneficialservices for people, fish, and wildlife. Some of these services, or functions, include protecting and improving water quality, providing fish and wildlife habitats, storing floodwaters, and maintaining surface water flow during dry periods. Most fish and waterfowl species are born in wetlands. The U.S. Fish and Wildlife Service estimates that nearly 43 percent of threatened and endangered species need wetlands for their survival. “Wetlands are the world’s nursery,” said Mason.

In a related matter, Merv Bartholow, president of the Buckeye Lake Area Civic Association, said during the association’s June meeting that he was concerned proper oversight is not being given to wetland mitigation within residential developments around the lake, particularly The Landings at Maple Bay on the north shore of Buckeye Lake and Snug Harbor on the south shore, as both projects require wetland mitigation. Bartholow was extremely clear that he was not implying any wrongdoing on any developer’s part and he does not want to stand in the way of development projects, but he hopes developers 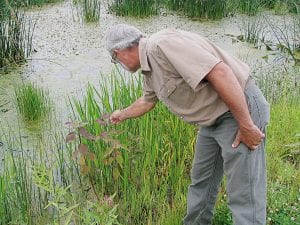 will hold public meetings to discuss their developments and their plans for wetland mitigation.

“My role is not to findfault, just ask questions. What long range impact will this have on the community?” said Bartholow, who was concerned that plans for wetland mitigation in the Landings and Snug Harbor have not been approved by the Ohio Environmental Protection Agency and other government agencies. Generally speaking, if wetland mitigation is ever left in the hands of the wrong developer, he said, “we could have problems. We can’t expect mayors and trustees to know all this. There’s a responsibility on developers, residents, and governments to work together.”

The Landings at Maple Bay is a 78-unit condominium development located on the southwest side of Hunts Landing Road in the Village of Buckeye Lake. It includes a man-made canal, a marina with boat slips, a boat storage area, and a clubhouse with a pool.

Rob Milligan, environmental specialist at EMH&T – The Landing’s engineering firm- said the wetlands mitigation plan submitted to the US Army Corps of Engineers and the Ohio EPA in December 2006 for The Landings at Maple Bay would enhance and create nearly two times the amount of wetlands filled by the development. He said 1.59 acres of wetlands will be filled, but the developer plans to create 2.89 acres of wetlands “improved and expanded” on the site of The Residences at Maple Bay, a single family home development adjacent to the Landings at Maple Bay to its west.

Milligan said while the US Army Corps of Engineers and the Ohio EPA have not given final approval to EMH&T’s mitigation plan, he believes the plan will be approved.

Snug Harbor is a 120-acre mixed use project on the south side of Buckeye Lake being developed by developer Marty Finta’s Triglyph Development Co., Inc. Plans include 230 residential units, a 30-acre inland harbor, a seven-acre island with up to 21 cottages, an Easton-like town center, and a 1,500 feet boardwalk with restaurants and shops.

Randy Bournique, manager of the wetlands section of the Ohio EPA Division of Surface Water, said according to information submitted to the Ohio EPA and the US Army Corps of Engineers from Triglyph, Finta plans to create 8.46 acres of wetland adjacent to the development site to compensate for 5.47 acres of filled wetland. Bournique said the mitigation proposal also involves enhancing some of the existing wetlands in the Snug Harbor area.

He was clear, however, that the information is based on the applicant’s submittal. The Ohio EPA has not completed a detailed evaluation of the project proposal or the wetland mitigation proposal. The application package is currently incomplete and the detailed review will not begin until all the information is available, said Bournique.

Finta added that the large mounds of dirt around Snug Harbor will remain to act as sound buffers, similar to the mounds that surround Heron Bay. The Snug Harbor buffer mounds – created mainly from the dirt removed from the 30-acre inland harbor – are being planted with grass and contoured, he said.

Bartholow said that as development continues around the lake, the wetlands will continue be affected and it’s important for the community and local governments to keep an eye on them. Bartholow believes people in the community would feel better if a government agency classified the lake area’s wetlands and determined how to proceed. “It requires more than the developer saying, ‘Don’t worry about it, we’ll take care of it,'” he said.