The South Shall Rise Again? 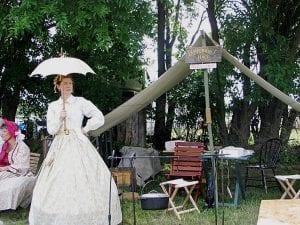 “We do the Battle of Infirmary Mound,” said Licking Park District Director Russ Edgington. “We show what a battle would’ve looked like during the Civil War.” The Union didn’t win every battle, and the Licking Park District’s annual reenactment is just as unpredictable.

June 23 and 24, 1,100 spectators and 423 re-enactors- -who enjoyed coolly moderate temperatures for a change– flocked to Infirmary Mound Park near Granville to hear the roar of cannon fireand smell the smoldering gun powder. Both sides led their troops to victory in two mock battles over the weekend.

Edgington said that recreating a specific historic battle generally takes many more troopsandmore equipment than is available for the Infirmary Mound reenactment, so the re-enactors stage their own battle scenes in Civil War tradition. “The event went really well,” he said. 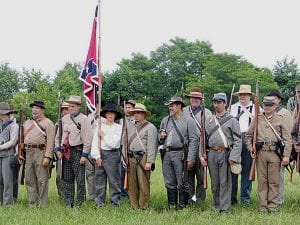 While it’s common at re-enactments to see women in Civil War era costumes watching the battle from the sidelines or preparing the infirmary for a mock amputation, it’s becoming more common to see women taking part in the actual battle scene.

Some traditionalists may bristle at the idea of women joining the fight, but Edgington said it has some historic precedent. During the Civil War, some women would disguise themselves as men and grab a rifle. They’d be kicked out if discovered, but that didn’t stop many women from trying. As far as the reenactment goes, it’s a very family oriented event that many wives and daughters can’t resist taking part, historically accurate or not.

In fact, said Edgington, the Licking Park District will need to increase its family camping area next year because so many of the original re-enactors are getting their children in on the action. 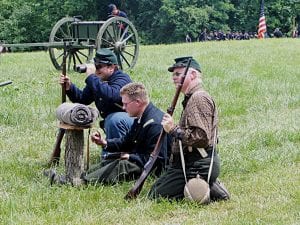 Edgington said this year’s attendance was in line with
the last five or six years, but not as large as a decade or so ago, when 3,000
people would show up for the Sunday battle alone. “There’s a bit of saturation,”
he said, as some people assume each year is the same as the previous. Edgington
is working to make each year unique. Next year he hopes to bring historic
accounts of the Underground Railroad. 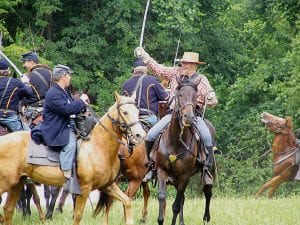 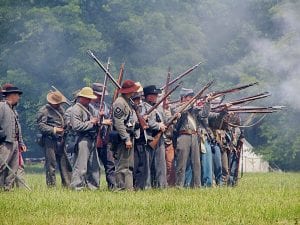 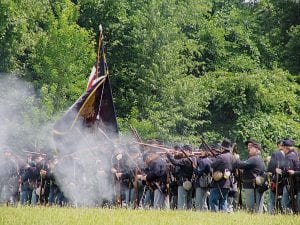