The monster arrives at Lieb’s Island 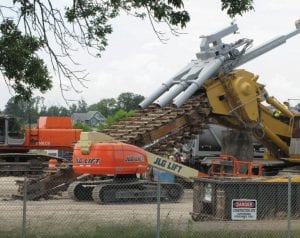 BUCKEYE LAKE – After a 13-month construction hiatus and a more than 90-day startup delay, the most important part of Phase II is finally here.

We speculated last week that the massive soil mixer would have two arms to create the P-shaped buttress wall in one pass. We were wrong,

The three gray tubes – one over each of the three blades – are the cement and likely water supply tubes. Rather than using fixed Portland cement silos to supply the cement mix via lengthy rubber hoses as was done with the three augur machines during Phase 1, it appears that the specially designed trailer-mounted silo will move with the mixing unit. Portland cement loads would be delivered directly to the silo similar to how Phase I’s much smaller one pass trencher was supplied. It appears that the new trencher will back down the stability berm . 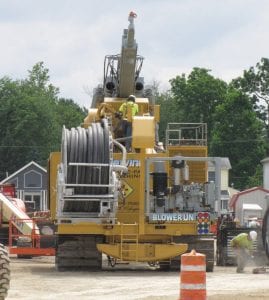 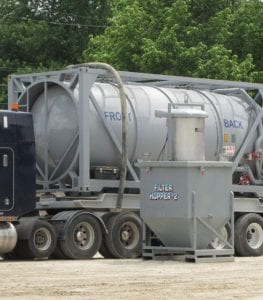