The Flow Of History 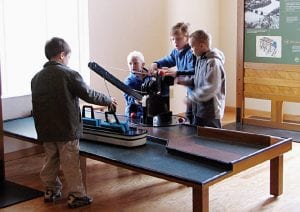 Myers’ presentation is just a part of a Buckeye Lake and Licking County celebration of one of the area’s oldest forms of transportation, which, after years of backbreaking work to dig the canal and build the locks, gave way to trains, planes, and automobiles.

The Buckeye Lake Museum is one partner The Works Gallery’s Passport to Ohio’s Canal History, which also includes the Licking County Historical Society, Granville’s Robbins Hunter Museum, and Coshocton’s Historic Roscoe Village. The program offers a free prize to anyone visiting at least three of the participating museums and who takes a stamped “passport,” which verifies the visits, to The Works Gallery in Newark by June 2. 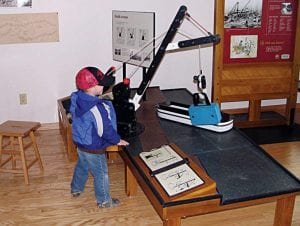 “The canal’s a big part of our history,” said Buckeye Lake Museum Director J-Me Braig. The museum presented the January exhibit “Memories of Minthorn,” a collection of artifacts discovered during the excavation of the Minthorn Lock near Buckeye Lake.

“We were pleased to have Buckeye Lake as a partner,” said Aaron Keirns, director of communications for The Works Gallery. His museum displayed the traveling exhibit “Building America’s Canals” through April 10; The Works Gallery is an affiliate of Washington DC’s Smithsonian Institute, which helped sponsor the display and the passport program.

The Ohio and Erie Canal was a canal constructed in the early 1800s, which connected Akron, Summit County with the Cuyahoga River near the Cuyahoga’s mouth on Lake Erie in Cleveland, Cuyahoga County, and a few years later, with the Ohio River near Portsmouth, Scioto County, and then connections to other canal systems in Pennsylvania and Ohio, according to Wikipedia.com. 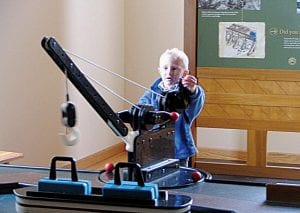 In fact, the Ohio and Erie Canal’s first shovelful of soil was overturned July 4, 1825 along SR 79 near Buckeye Lake. The canal carried freight traffic from 1827 to 1861 until railroads dominated land transportation. The canal served as a water source to industries and towns from 1862 to 1913.

Maintenance costs caused the canal’s expenses to outgrow its revenues following its peak in the 1850s. The Civil War also claimed much of its revenue.

Most of the canal’s southern portion was abandoned by 1911. Record flooding in 1913 doomed the rest of the canal as high waters destroyed many of its locks and aqueducts.

Today, remnants of the Ohio and Erie Canal show us glimpse of a bygone era. Keirns said a section of Lock 9 was unearthed below a building removed across the street from The Works Gallery’s main building. He hopes the gallery can build a park around the lock’s remains. “The canal literally ran right beside our building,” said Keirns. 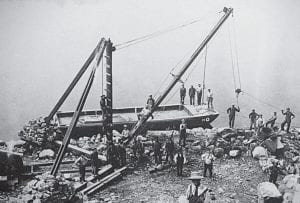 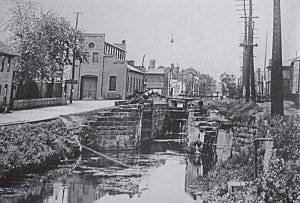