BUCKEYE LAKE – ODNR Director James Zehringer spoke for thousands of Buckeye Lake residents and visitors Thursday morning when he said, “Been waiting for this day for a long time.”

Nearly two hundred state and local officials, ODNR employees, area residents and contractors turned out on a bright morning for the announcement that the new dam is completed. “Three years ago, we thought this project would take five years and $150 million,” Zehringer said in his opening remarks. “Instead it was $107 million and three years.” He also noted it was ODNR’s first capital project to exceed $100 million, the first to use soil mixing and the first to use a construction manager at risk.

State Senator Jay Hottinger said, “What an awesome, exciting day.” He spoke about the decisions made in March 2015. “They weren’t the popular decisions, but they were the right decisions.” Hottinger said Buckeye Lake is “beloved across the State of Ohio.” He added, “Early and under budget – you don’t hear that very often.” Hottinger concluded, “Buckeye Lake’s best days are to come and today marks the start.”

State Representative Tim Schaffer also commented on the early and under budget finish, adding that he had some suggestions for $43 million saved. He also thanked citizens groups for weighing in on the project.

Former state senator and now Congressman Troy Balderson said, “We knew this needed to be done.” He also thanked the contractors and their workers for getting it done early and under budget.

Fairfield County Commissioner and Buckeye Lake Marina owner Dave Levacy recounted the ominous conference call on March 19, 2015, with Zehringer and the Army Corps of Engineers. “I thought it was going to be 10 years.” He said the decision to keep the lake at winter pool in 2015 prompted the three lake area counties to cooperate on an economic study. That cooperation has now lead to the formation of the Buckeye Lake Region Corporation which includes all three counties, school districts, villages, townships and homeowners’ associations.

“I want to personally than Governor Kasich” Levacy added. “It took a lot of political courage…The completion of this dam is the beginning.” Levacy then read the dedication plaque.

Kasich followed Levacy to the podium and immediately said, “Let me debunk this concept of political courage.” He said it doesn’t take courage to make the right decision. Kasich called ODNR Chief Engineer Hung Thai to join him. Kasich said Thai was Vietnamese and emigrated here when he was 13 years old, making a thinly veiled jab at President Donald Trump. Kasich said Thai expressed concern to him about the condition of the Buckeye Lake Dam and Thai’s inability to sleep during heavy rains.

Kasich also said, “People fed misinformation.” He added, “At some point a leader has to make difficult decisions.” He downplayed that difficulty with, “I didn’t have to come out here; Jim (Zehringer) did.” Kasich called the retiring Zehringer a “cheap farmer,” crediting him on getting the project done under budget.

“This is a celebration for every single person who lives in this area and the state,” Kasich continued. He said the dam had been a risk for many years because politicians were afraid they would be criticized.

“You can’t be afraid to make decisions,” he emphasized. “Sometimes you make mistakes.” He specifically mentioned SB5, enacted early in his first term to limit collective bargaining for public employees, that was overturned by voters after an initiative petition put it on the ballot. Kasich said it was too much, too fast.

As officials were lining up for the ceremonial ribbon cutting, Kasich said he wasn’t going to make it an all-male event. Several audience members suggested Buckeye Lake Mayor Peggy A. Wells join the group and Kasich then asked Buckeye Lake Council President Kitty Zwissler to join them. Kasich offered a brief prayer before cutting the ribbon. He then said he and Zehringer were going to take a solo walk out on the jetty next to the boat launching ramps, inviting any critics to join them at the risk of being pushed into the lake. Only Kasich, Zehringer, a photographer and a member of his security team made the walk. 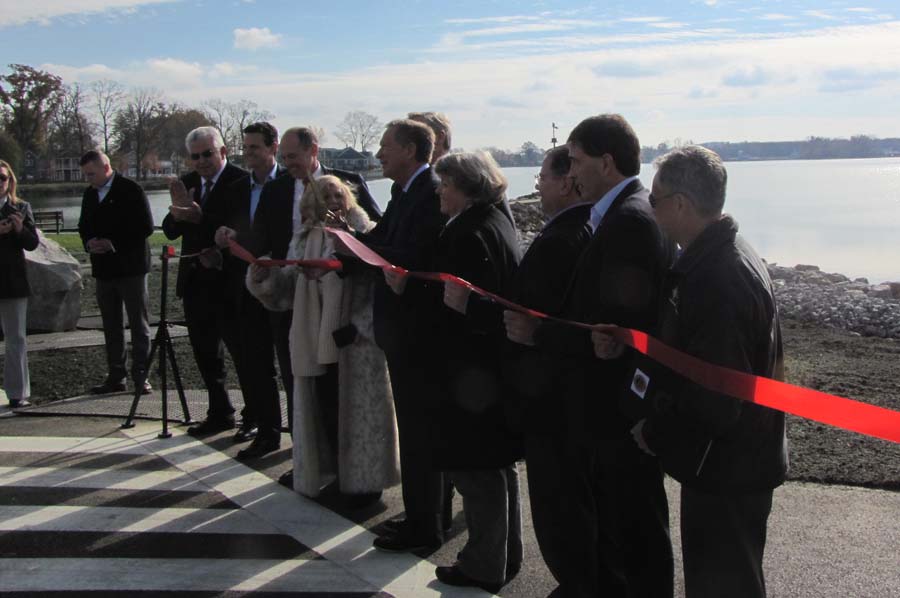 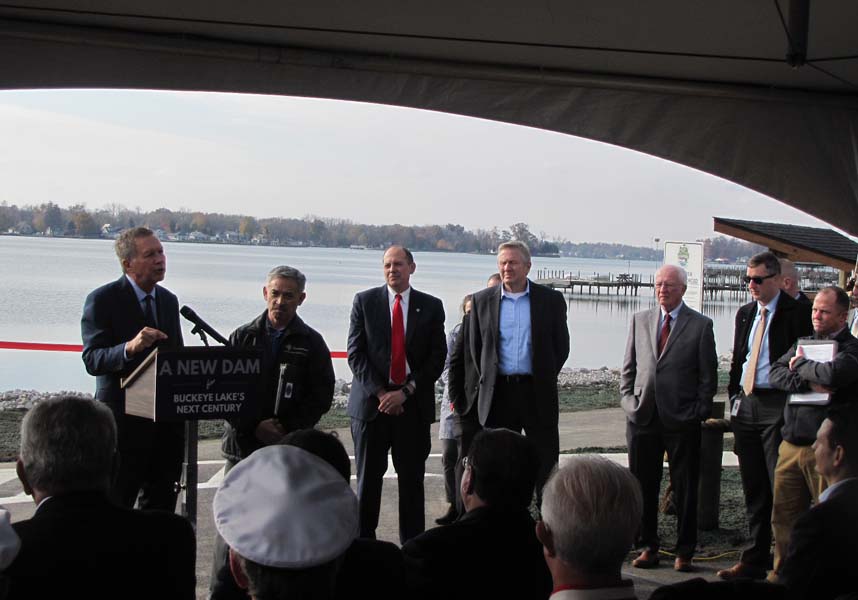 Governor John Kasich asked ODNR Chief Engineer Hung Thai to join him as he recounted Thai’s concern about the condition of the Buckeye Lake Dam and his inability to sleep during heavy rains at Buckeye Lake. Beacon photos by Charles Prince. 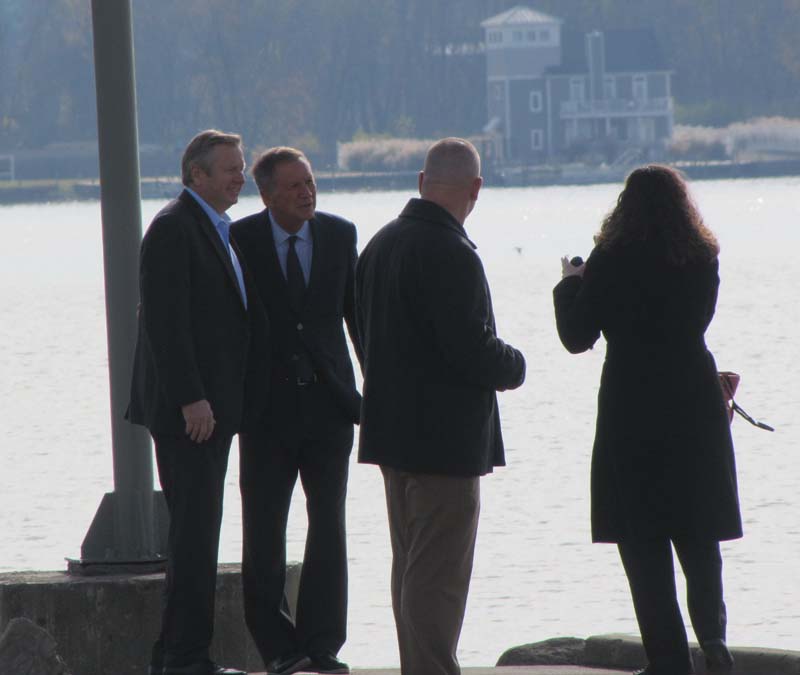 Governor John Kasich and ODNR Director James Zehringer’s walk out on the North Bank jetty.  Speaking of walks, fences and plastic barriers have been removed from most of the 4.1 mile new dam.  The blacktop roadway is now open to walkers, runners and bikers.