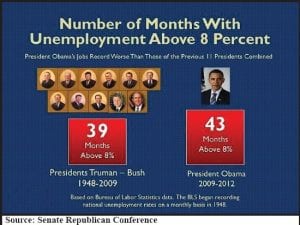 Today that battle cry should be aimed at voters. The Obama campaign wants to discuss anything but the economy. That why we’ve heard about saving Big Bird and Romney’s “binders.” It’s no surprise that Obama doesn’t want to talk about the economy. His 43 months of unemployment above eight percent exceeds the total of the 11 presidents that preceded him. That’s quite a record. Real unemployment, which includes those who have given up looking for work, is far above reported numbers and would continue his above eight percent streak for many months.

Participation in the workforce is below the level in 2002. Almost 47 million Americans – 14 percent of the population – are now on food stamps – a record level. In 1990, the total was 20 million. The vast expansion on his watch earns him the title of Food Stamp President.

What we desperately need is a Jobs President. That’s clearly not Obama. Most Beacon advertisers have created far more jobs than the crew now in the White House. We don’t need government jobs. To steal one of liberals’ favorite words, many government jobs are not sustainable. They don’t create wealth for our economy. In reality, their direct costs – salaries and benefits – and indirect costs – more regulations, taxes, paperwork etc – which often far exceed the direct costs, suck wealth out of our economy.

Obama has spent nearly four years making words like ‘profit’ and ‘wealth’ sound like dirty words. He continues to demand tax increases on millionaires who only need to make $200,000 a year in his world. Taking more money from our prime job creators when they already pay most of the income taxes doesn’t make sense. Increasing the cost of doing business by purposefully increasing the cost of fossil fuel to push his green energy agenda is another burden placed on job creators. His new regulatory schemes also dampen growth and profits.

Profit is not a dirty word. Only a profitable business can afford to expand and hire more employees. Employees at unprofitable business are lucky to just hold onto their job. Increases in pay or benefits are just pipe dreams. Profitable businesses can repay investors, giving them a profit which can be reinvested in another business. An economy grows on profits. And we all benefit from a growing economy.

Though the recession officially ended over two years ago, most of us can’t tell any difference. That’s because the economy is still barely growing. This time GNP growth has been far below historic recoveries. It’s really not a mystery.

Obama has spent four years beating up business people. His ‘you didn’t build that’ demonstrates his low regard for risk takers and successful business people. He believes government made them successful, not hard work, ingenuity, and perseverance. More government is his answer to every problem or opportunity.

A new attitude in Washington can get this economy growing again. And everyone will benefit. Incomes will increase as will tax revenue. There will be jobs for our children they finish school. A new attitude requires some changes. We need Mitt Romney in the White House and Josh Mandel in the Senate.