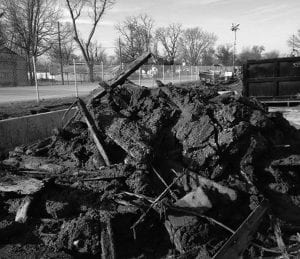 This is what’s left of Black Diamond canal boat that sank in 1820. Courtesy photo.

BUCKEYE LAKE – Buckeye Lake Museum Director J-me Braig had a feeling when dam construction crews began digging around the former Buckeye Lake Amusement Park grounds they’d find something interesting, maybe even the legendary Black Diamond coal freighter that sank in 1820. She was not disappointed; remnants of the shipwreck were unearthed.

“I have been on this since I saw that big rake they started using at North Shore,” Braig said. She made friends with its operator, Barry, and told him the story of the old amusement park and that there would likely be all kinds of interesting things on the lake bed. Braig asked if he would watch for artifacts, such as bottles, coins, park stuff, and the like. It wasn’t long before he began dredging up such artifacts.

“I would meet with him and he would give them up,” Braig said. “He found about 10 bottles and a wonderful soup bowl that says Lake Breeze on the bottom of it.”

Braig followed the crews daily. “I asked how deep that rake went down,” she said. “He told me four feet. That’s when I starting thinking about the wreck of the Black Diamond.” 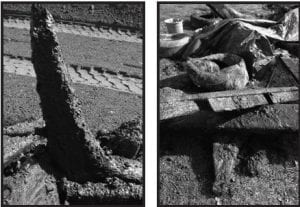 Left, is a piece of the stern. Right center is believed to be part of the cabin roof. Courtesy photos.

Braig said the shipwreck has been discussed for years. She said the boat was hauling coal from Newark to Thornport when its hull became caught on a stump and the boat capsized. Its four-person crew escaped the canal boat before it sank.

“We tell the story on the (Queen of the Lake II) tour boat and I began to think that if we ‘raked’ it slowly and at four feet we might find some coal and a possible piece of the boat,” Braig said.

“For many years locals would go there and bring up coal,” Braig said. “Divers would swim around down there and see what they could locate. At one time, I would say in the 1990’s, a piece of the boat was found. We have it in the museum.” She said that particular piece has a metal rod sticking from it. “I told Barry (the rake operator) to look for pieces of wood that might have some metal rods connected to it,” Braig said.

Braig continued the vigil of checking with both the day and night construction crews as they approached the shipwreck site. “I told them to call me day or night if they found anything,” Braig said. “(Michael Baker International) employees Jacob and Rick were so interested in the history of this, and the crews were becoming interested as we got closer and closer.”

Braig said she raised the possibility of a discovery at the February Citizens Advisory Council meeting. “So, they were very cooperative, all of them – ODNR, Ruhlin, ASI, and Baker,” Braig said.

Around midnight, Feb. 20, Jacob sent Braig a text with a picture. He texted, “I think we found your boat.”

Braig was thrilled. “I went to the site only 70 feet from Black Diamond Point on Sunday,” she said. There was no work on the dam that day. “Sure enough, there it was,” Braig said. “It was a very large piece with rods sticking out of it. I knew we had hit pay dirt. I believe that it was a piece of the bow.” There were also pieces of coal. “Lots of them and some of them were very large pieces,” she said. “I was ecstatic; this was great!”

The next day, Braig went to the site at 7 a.m. when the next rake began. “They starting bringing up many many pieces of wood,” she said. “Some small, some big, some splintered, and more coal.” The second rake took place 4 p.m. They raked roughly 30 to 40 feet. “I knew that the canal boat was 50 feet long. They then brought up another big piece that I think is the stern,” Braig said. “It was beautiful.” The final rake was at 7 p.m., which dredged only a few more pieces of wood. They raked another 30 feet but found nothing else.

A truckload of pieces was taken to the North Shore to a secure location. It was a very large pile covered in Buckeye Lake mud.

“Larry the gentleman in charge of the North Shore area and equipment help me spread it out a little bit and I began to look through it,” Braig said. She found plenty of coal, bottles, and hundreds of small shards of wooden boat. “I knew this was going to be lots of work,” Braig said. “However, it was so exciting and such a wonderful find, I figured we would be able to figure out what to do.”

Tuesday morning, Braig was told that ODNR hired Columbus archeology firm Lawhon & Associates to inspect the site and the pieces of the wreck. “I was told that it is standard practice for an archeology team to be called in when something of this magnitude is found,” she said. Also, Ohio Historical Society members and about 20 more archeologists from everywhere arrived to ogle the wreckage.

“Much to my dismay the site was secured and closed off to the historical society and me,” Braig said. “They took the big pieces in a dumpster to Leib’s Island and submerged them again to keep them from drying out. They then wet down and covered all the material at North Shore. They were very interested in where it was found and if I thought there was any more.” She said when she saw the site on Tuesday, the new berm had covered it.

“At this time I’m not sure who will own the Black Diamond canal boat when it’s all done,” Braig said. “Of course we want it to come back here to Buckeye Lake and the Museum. That could be awhile off.” She said it will be preserved, tagged, and identified as the Black Diamond. “I know that it is the boat but you have to make the official,” Braig hopes the Historical Society is allowed to be a part of this dig and identification of items found at the site.

“It was a wonderful experience; I was elated,” Braig said. “I know the construction people were, too. It brought us all together for a bit for a common cause that shows the rich history we have here.”

Braig continued, “I think that many thought that I was out of my mind, that there was nothing there but old tires, lawn chairs, fishing poles, bicycles and lots of fishing line. This has shown we were right. The story has been around since 1850 and we believed in the story. We hung in there and we were rewarded.”