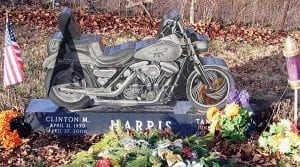 Friends of Clint and Tami Harris have raised over $800 in a little over a week toward paying off a $1,764 balance due for their unique Harley monument at the York Street Cemetery in Harrison Township. Beacon photo by Charles Prince.

BUCKEYE LAKE – Thanks to Gary Webb and other friends of Clint and Tami Harris, a mid- January repossession of the Harris’ unqiue Harley monument has been pushed back to the end of February.

Webb and others are determined to pay off the $1,764.07 balance due well before the end of February. In a little over a week, Webb, with his own money and donations from Ron Braden, The Beacon and others, has reduced the balance to $944.07.

The planned repossession caught friends by surprise. Many had donated money to pay off the monument, originally planned by Clint as a memorial to his wife,, Tami. Clint died in a work accident just six months after Tami died in a single vehicle crash on Ohio 79 following a seizure.

Rick Canter claimed to have raised over $5,000 to pay off the monument in 2006. Only a portion of that money made it to the Sandusky, Ohio monument company. Canter is currently being held in Licking County jail on charges of felony and grand theft. He is accused of taking nearly $10,000 from an elderly victim. He has not been charged with anything concerning the Harris” monument. Although several donors have discussed the situation with the Licking County Sheriff’s Office,a formal complaint has yet to be filed.

Donors are being asked to make donations via checks or money orders made out to Balconi Monuments Inc. Donations can be mailed directly to Balconi at 807 E. Perkins Ave., Sandusky, Ohio 44870 or dropped off to Webb or The Beacon. Please call Webb at 467-2434, The Beacon at 928-5541 or Balconi at (419) 626-5134 to check on the outstanding balance before mailing a donation directly to Balconi.