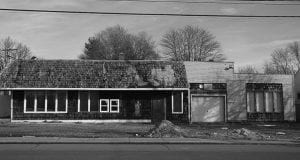 Council members heard the first reading Tuesday night of a resolution to begin the process to remove the vacant structures. The properties are:

The village must pay for title searches, legal work and the demolition, but will be reimbursed for expenses via the state program.

In other business Tuesday night, Mayor Dean Severance said Police Chief Mark Consolo had successfully completed his probationary period. “Mark has done a marvelous job,” he said. “I hear great comments about him.” Consolo was then sworn in as the village’s permanent police chief. Severance also swore in Todd Ashton as a new police officer.

Council members also heard the first reading of a resolution to prohibit two-way traffic on Cherry Alley which runs west from Lancaster Street. The narrow roadway would become oneway east to west.

“People have a terrible time getting out there (on Lancaster Street),” council member Gary Matheny said. “We’ve had some close calls,” Consolo added.

Council members briefly discussed the impact the change would have on Tadpole Alley which runs north and south off Cherry Alley. They decided to take a closer look before possibly making Tadpole one-way as well.

Council members unanimously agreed to buy a new skid steer loader for the street department. Arnold the current loader is 17 years old and needs about $1,500 in repair just to get it running.

He proposed buying a new Case skid steer off the state bid list from Southeastern Equipment. Arnold said it would cost $22,144 after receiving $9,000 for the old loader. The new model has a climatecontrolled enclosed cab and a road gear which makes it easier to move around the village. Council members will discuss how to pay for it at a Finance meeting at 7 p.m. on Tuesday, Jan. 22. Council members will also discuss membership rates for the pool at that meeting. The pool is tentatively set to operate from June 1 through August 18. Another issue is whether to offer an early payment discount for memberships. A family membership would cost $200.