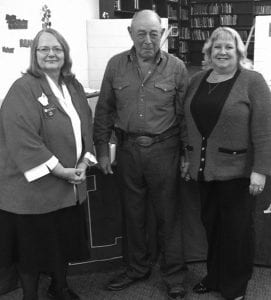 Lakewood School Board President Judy White, left, honored retiring board member Forrest Cooperrider for his 12 years of service on the board. His wife, Martha joined him for the meeting. Beacon photo by Scott Rawdon.

HEBRON – Lakewood teachers will receive base salary increases in each of the next three years. The new contract is retroactive to June 30, 2015.

Lakewood Superindent Mary Kay Andrews said the contract between the Lakewood Local Board of Education and the Lakewood Teacher’s Association runs through July 31, 2018. Effective August 1, 2015, base salaries will increase three percent and again on August 1, 2016. Most teachers will also receive annual step increases.

There were no changes in insurance from the last negotiated contract.

“We are proud of our teaching faculty and want to secure the best for our students,” Andrews said earlier. “This contract is a result of a lot of hard work and commitment by the administration and association leadership. The total package represents recognition by our board that Lakewood teachers should be compensated comparatively to other local districts in Licking County.”

“Our members asked us to the LTA bargaining team was proud to be able to deliver it,” Lakewood Teachers Association President and middle school science teacher Dawn Villares commented earlier. “We spent many hours in candid conversations with the board of education’s bargaining team, trying to find solutions that were beneficial to both sides. The new agreement includes reasonable adjustments to compensation and also provides additional protections and benefits for our staff.”

In other school district news:

• Board members honored board member Forrest Cooperrider for his 12 years of service to the board. Cooperrider chose not to seek another term after his current term expires at the end of the year. He has served on the board since 2004.

• Lakewood High School Assistant Principal Kevin Krier said the athletic boosters hired a professional design firm to help create Project Lancer. “Jobes Henderson & Associates has come on board and helped us with design and engineering of the new proposed stadium,” he said. “Other than that we are in a holding pattern, nothing has changed to this point. I’m waiting on pledge figures from several businesses that have told me they will donate.”

What began as a $660,000 artificial turf installation for Lakewood’s Calhoun Memorial Field blossomed into a $1.7 million upgrade of the entire facility.

In addition to replacing the existing grass with turf, Krier said previously that plans are to renovate the concession stand, replace the scoreboard, add two lanes to the track, add restrooms, and bring the bleachers up to date.

Krier emphasized that the expanded project would still be funded by private donations and the athletic boosters aren’t asking the Lakewood School Board for money. Boosters have raised about $185,000.

Krier said the total for the entire project is roughly $1.7 million.

• Students looking for help with college applications are encouraged to attend the College Application Blitz, Nov. 19, 2 to 7 p.m. at the Lakewood High School Library.

For those who can’t attend Thursday, a similar blitz is at Newark High School Nov. 18 after school until 7 p.m.

• Nov. 11, school board members voted to approve several coaches including: