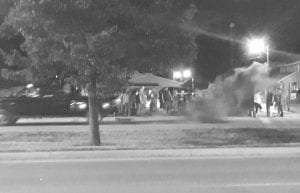 After years of trying to attract more Mopar Nationals visitors to Buckeye Lake, the two-year old SuperCruise format is getting the job done. Mopar Nationals visitors have great demographics – most are 50+, have money to spend and want to show off their prized classic vehicles. Their business and that of the spectators they attract were a big shot in the arm this weekend and particularly Saturday evening during the SuperCruise to lake area businesses and organizations struggling with the impact of the dam replacement project.

While we enjoy a good time as much as anyone, SuperCruise needs some strong control and direction before a tragedy mars the event for many years. It can not be allowed to become an event where – “I can do anything I want” – as a driver in his 30’s with an open container told a Buckeye Lake resident who objected to the use of his driveway as a turnaround Saturday night. The driver showed his contempt for private property by spinning out in the private driveway. spraying gravel in every direction. Efforts to protect private property were meet with taunts, threats and profanity.

Pickup trucks spinning tires with passengers seated or even standing in the bed are a serious accident waiting to happen. Spectators, including small children, seated or standing just inches from the roadway are just one fishtailing, out-of-control burnout away from serious injury or death.

The time to take steps is now, before anyone is seriously injured or killed. Rather than look away, it is time to acknowledge the concerns that many of us, including Buckeye Lake Police officers and neighboring officers, have about how close this event is to the edge. Fears about a major accident or large fights are very real.

The risk isn’t from Mopar Nationals visitors – they are mature and very protective of their vehicles. The problem comes from those who hope to co-opt the festive and packed atmosphere with their “I can do anything I want” attitude. They know police officers are totally overwhelmed so they push the window with open containers, reckless driving etc.

Buckeye Lake Village has long had an “anything goes” reputation that has been mellowing as its housing stock improves and as the average age of its residents increase. Sadly, village government is still far more reactive than proactive. We have 51 weeks until Mopar Nationals return. We welcome and need Mopar visitors in Buckeye Lake. But village officials and local law enforcement need to take concrete steps to keep this event from spinning out of control and into a tragedy that could have been prevented.

Here’s a couple of suggestions. Let’s consider a sobriety check-point like entry into the village where police officers can quickly assess whether a driver and passengers are or have been drinking and hand drivers a brief list of expectations. Another suggestion is to create a burn-out area with physical barriers between the vehicles and spectators. Our overriding objective over the next 51 weeks should be to keep SuperCruise fun for visitors and spectators alike AND safe for everyone, including property owners who just want to be left alone.